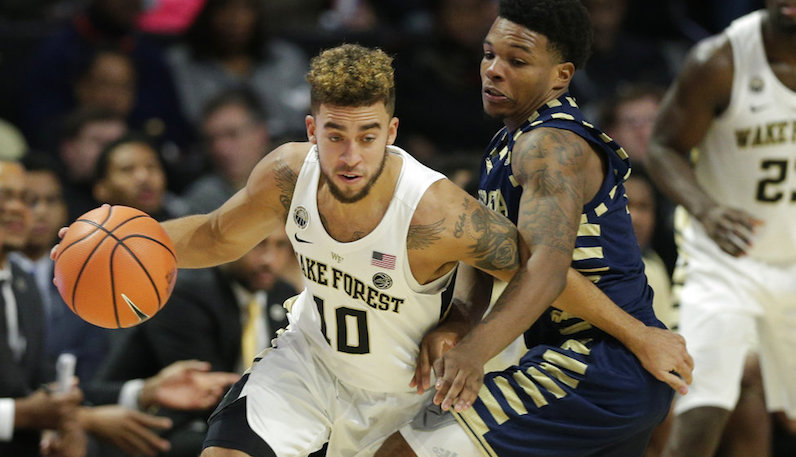 The Wake Forest basketball program has been surrounded by a lot of positive talk recently.

That talk has been about the improvements under Danny Manning, the chance for a second straight NCAA Tournament bid this season and about the impressive recruiting class that is scheduled to arrive next fall.

But after one exhibition game and one regular season game, the talk has taken a different turn: “Don’t panic.”

The Deacons lost the season opener for the first time since the debut of Jeff Bzdelik in 2010 (yes, we just used the “B” word…). Both losses were to mid-majors with the Deacons falling to Georgia Southern this season and Stetson in 2010.

But an opening loss isn’t necessarily the end of the world, right? Especially considering that Georgia Southern is a solid team, expected to contend for the Sun Belt title and boast one of the nation’s most experienced rosters.

Perhaps there are reasons for the Deacons to panic, however. First, the opening loss (as well as the exhibition squeaker) only served to highlight all of the weaknesses that prognosticators said Wake Forest would have to overcome. Second, the Deacons’ schedule doesn’t really allow for early season hiccups.

On the court, the issues start with defense. You might remember that’s where we left off last season, too, when the Deacons gave up 99 and 95 points in their two postseason losses.

Wake Forest gave up 85 to Georgia Southern and allowed 47.8 percent shooting, which is worse than last year’s 45.7 percent (267th in the country). The Eagles beat the Deacons consistently on drives, also a problem last season, and Wake Forest gave up 15 offensive rebounds.

That points to the Deacons’ lack of any inside play as Georgia Southern’s Montae Glenn, who stands 6-foot-8, hit 7-of-9 shots for 14 points and 13 rebounds, eight on the offensive end.

Wake Forest played without Olivier Sarr, who has a minor hand injury, but the big men were ineffective. Doral Moore continued to struggle, and Donovan Mitchell and Sam Japhet-Mathias did nothing. Combined, the three played 31 minutes, went 1 of 4 from the field, had two points, six turnovers and six rebounds.

On offense, that meant the Deacons’ worst fears played out. The points came from only three players: Bryant Crawford, Keyshawn Woods and Chaundee Brown. The three had 65 of the team’s 83 points. Manning’s small lineup that also included Brandon Childress and Terrence Thompson scored 81 of Wake Forest’s 83 points.

Some things will improve. Mitchell Wilbekin won’t go 0-for-7 every night, and the Deacons hope that Childress will shoot better than 2 for 9 and cut down on his five turnovers.

Perhaps Sarr’s return will be able to make strides and help the inside issues, but Manning and his staff better figure something out quickly. We’ve previously noted that the Deacons don’t have many chances to impress in their non-conference schedule and that the NCAA rule changes didn’t help them.

Essentially, Wake Forest basketball has a few games to catch the eye of the selection committee: Illinois and Tennessee, with possible match-ups with Colorado and Houston in the Paradise Jam. But the first two match-ups are in Winston-Salem and the second two on neutral courts, knocking them down a notch in the committee’s eyes. And none of the four are currently even top-50 RPI teams.

So the Deacons didn’t have margin for error before starting a tough ACC slate, and whatever margin existed they may have just spent in the opening game.

Into the future: A look at Wake Forest basketball in 2018-19