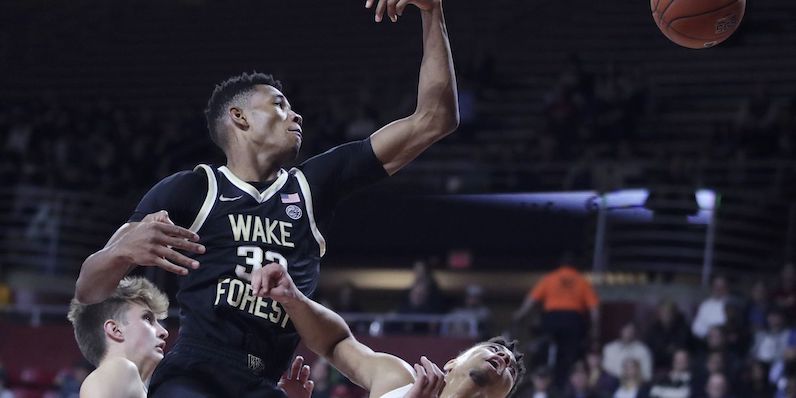 It’s early in the Steve Forbes era, but already Wake Forest has a couple victories. So far, the Demon Deacons have retained several key players, led by forward Isaiah Mucius. A rising junior, Mucius will team back up with two sophomore frontcourt contributors — center Ody Oguama and forward Ismael Massoud.

Late last week, Oguama entered the transfer portal, but left the door open for a return. Oguama wasn’t in the portal for long: Forbes told Les Johns of Demon Deacon Digest that the 6-foot-9 Oguama will be back for his sophomore season. Forbes also mentioned that Massoud will return, too.

As a freshman, Oguama played in 31 games (24 starts) and averaged 2.9 points and 3.9 rebounds. Oguama is an asset on the offensive glass: 11.7 percent offensive rebound rate. According to Synergy Sports, Oguama shot 57.7 percent on put-back attempts this season, too.

Wake notes, on the quickly developing roster and coaching staff for the Deacs and Dave Clawson's involvement in Steve Forbes' hiring: https://t.co/02ECVyezYw

Massoud, as Conor O’Neill notes in the Winston-Salem Journal, never officially entered the portal. Back like he never left — literally.

Next season, Massoud could provide serious value to Wake Forest’s lineup: an established shooter. Massoud connected on 33-of-83 3PA (39.8 3P%) this season. His best work comes off the catch; all but 3 of Massoud’s 3-pointers were assisted on.

Better yet: Massoud posted an effective shooting rate of 69.7 percent spot-up no-dribble jumpers this season — No. 3 in the ACC among players with 50+ possessions.