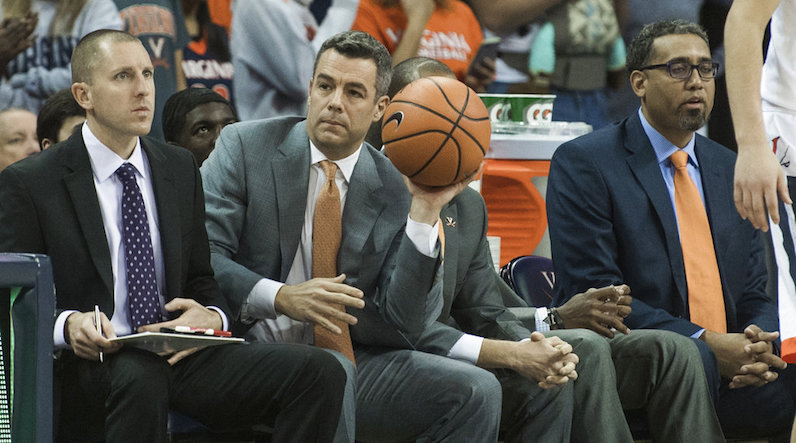 Virginia's head coach Tony Bennett sets to throw ball back to the official during game against Lehigh during the first half of an NCAA college basketball game in Charlottesville, Va.Saturday, Dec.2, 2017. (AP Photo/Lee Luther Jr.)

Just about every college basketball program takes a little break from games sometime in December to focus on final exams for the semester. Virginia has traditionally taken it to another level.

Mr. Jefferson’s University allows absolutely no athletic competition during the exam periods. The football program once even turned down a more prestigious bowl invitation to go to Boise because of a conflict with finals. Cavalier baseball players have, at times, lamented that the spring exam period can disrupt momentum shortly before the ACC tournament.

But the extended break, sometimes as long as two weeks, generally hasn’t hampered the Cavs in hoops. In fact, Tony Bennett’s Virginia teams are unbeaten in the first game back from exams. It started back in 2009 with a 31-point victory against NJIT and since then the Cavs have opened the second semester with a list of teams that includes Oregon (twice), West Virginia, Villanova and Northern Iowa.

Virginia has actually played some of its best basketball in the Bennett era shortly after taking some time to focus on the studies. Last season, UVA won three straight after the break, including road games at Cal and Louisville and a 40-point destruction of Robert Morris. The year before that, Virginia had 11 days off before taking down 12th-ranked Villanova. Bennett’s very first UVA team won eight in a row after exams, including three against ranked opponents.

Of course, the timing this season means Virginia has 11 days to stew over the tough loss at West Virginia. No matter, twice Bennett’s teams have went into finals after a loss. They won the next games by an average of 22.5 points.

And, in case you were wondering, Bennett’s Washington State teams went 3-0 after exam breaks that lasted from seven to 11 days.

So, it seems UVA doesn’t have much to worry about Saturday when Davidson visits John Paul Jones Arena to end an 11-day dormant period for the Wahoos.

The layoff has at times even been an opportunity for players to snap out of slumps, something Devin Hall did about this time last season. Ty Jerome came into the season with high expectations as Virginia’s new starting point guard, but has averaged just 5.5 points and 2.3 assists over his past four games. Perhaps with some time to regroup we’ll soon see the kind of player who broke out against Villanova last season.

The time off can be torturous for diehard fans needing a basketball fix, but likely has been well worth it for Bennett and the Cavaliers.