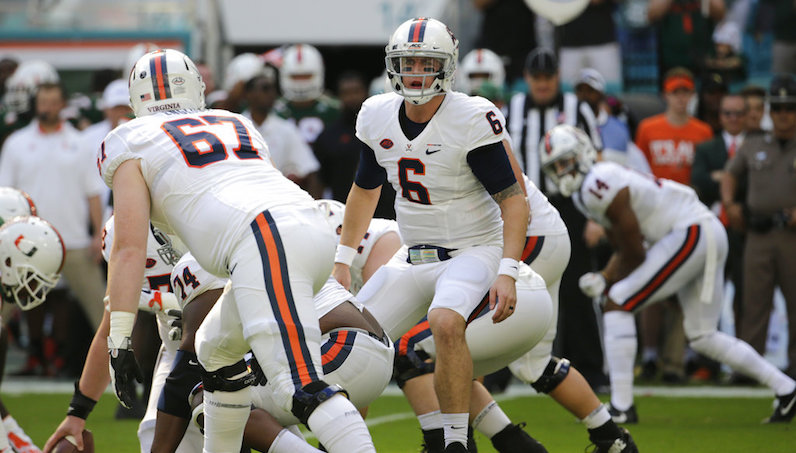 Virginia’s bowl game will also be the last college game for Kurt Benkert, the East Carolina transfer who gave a serious boost to the Virginia offense this season, breaking Matt Schaub’s single-season record and becoming the Cavaliers first 3,000-yard passer.

This season marked a rare time in the last decade of UVA football without a quarterback controversy, with Benkert the clear starter from Day 1. But next year could be a return to murky QB waters for the Hoos. Lindell Stone, who right now is slated to be a rising sophomore, but could be a redshirt freshman next year depending on NCAA rule changes, is the only other quarterback in the program who has taken a snap at UVa (not counting De’Vante Cross, who played in a Wildcat formation, but is likely a wideout or defensive back from here on out).

With that in mind, here’s a look at the possibilities.

THE MOST LIKELY CANDIDATE…FOR NOW

Stone went into this season as Benkert’s backup, which allowed him to get some solid preparation in practice. But Bronco Mendenhall and his staff were also very careful with how they used the true freshmen. Stone, a Texas native who played at Woodberry Forest School near Charlottesville, was considered the No. 1 QB prospect in the country as a freshman and sophomore in high school, but slipped to a 3-star recruit by the time he signed with UVA.

Stone played in one game this season, completing 2 of 9 passes for 26 yards with two interceptions against Boston College. He’s clearly got some developing left to do, but the potential is there. In an ideal world Stone could have at least another season to come off the bench, but he might be the best option available. Right now the odds of Stone starting opening day could be about 50-50.

OTHERS ALREADY ON BOARD

The other player already in the program is Texas transfer Matthew Merrick, who came in as a walk on this fall. Merrick was ranked among the top 100 players in Texas coming out of high school, but never played a game for the Longhorns. He’s been learning the system at UVA, but we don’t really know what he brings to the table.

The Cavs also have a commitment from Ohio product Brennan Armstrong. After decommitting from Minnesota, Armstrong chose UVA on Nov. 20. Armstrong is a 3-star dual threat prospect, and while it would take quite a showing once he arrives in Charlottesville to earn the starting job as a true frosh, Mendenhall has hinted he’d like to eventually get back to the dual-threat QBs in the mold of Taysom Hill at BYU. Merrick and Armstrong are both long shots to start, but their availability should give Virginia more depth from the get go.

There’s a good chance Virginia’s 2018 starter played college football somewhere else this season. Mendenhall has said all along he’d be interested in bringing in a transfer, who like Benkert has at least two years of eligibility and can play right away. Benkert was a graduate transfer, but there are going to be more players in the junior college ranks who fit that description.

Successful JUCO transfers have been a rarity in the UVA athletic department. Former basketball player Devin Smith, who was an All-ACC performer from 2003-05 comes to mind, but given UVA’s academic challenges, that’s not a route its coaches have typically taken. But, Mendenhall’s staff is showing particular interest in a pair of successful JUCO quarterbacks who originally went to Power 5 conference programs.

Bryce Perkins, who wound up at Arizona Western Community College by way of Arizona State, has visited Charlottesville and would have three years of eligibility remaining. Perkins is another dual threat who has led Arizona Western to the JUCO national championship game.

The Cavs have also reportedly extended an offer to former Auburn signee Woody Barrett, who played this season for Copiah-Lincoln Community College in Mississippi. Barrett was a 4-star prospect coming out of high school in Orlando with offers from Alabama, Oklahoma, Ohio State, Notre Dame and many others. Either Perkins or Barrett would likely become the frontrunner to start if they choose UVA.

One other quarterback to keep an eye on might be Wilton Speight, who was the Michigan starter before getting hurt this season. The Richmond native is transferring from the Wolverines with a year left to play.

Mendenhall has said he’s less interested in one-year quarterbacks, but the program is in a position where taking a player such as Speight could be Virginia’s best option if the quarterback is interested in finishing his career close to home.