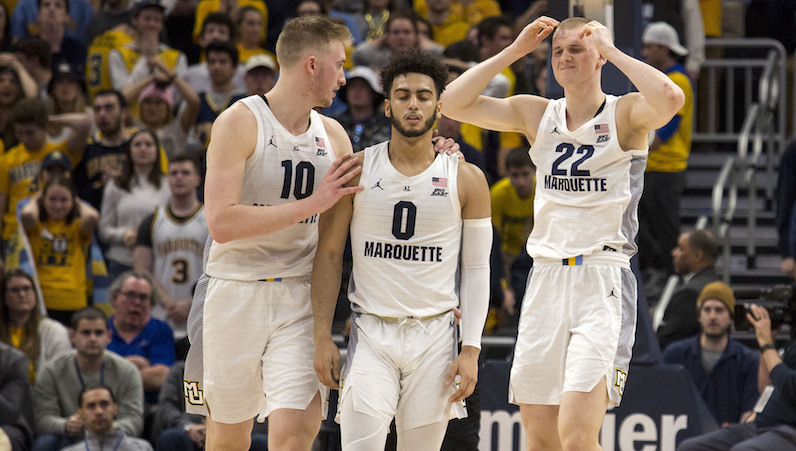 On Monday, it was announced that two of Marquette’s cornerstones for next season — Sam Hauser and Joey Hauser — will transfer out of the program. The brothers plan to transfer to the same program, too. Both players will have to sit out next season with a redshirt; beyond that, Sam has one more season of eligibility left, while Joey has three. Markus Howard will have to run with new teammates in 2019-20.

Fresh off its national title, Virginia is in the lead for both players, according to multiple media reports.

Sources close to the Hauser brothers tell me Virginia is the front runner to land them as transfers. Wisconsin is also in the mix. #mubb #Badgers

During his three-year career at Marquette, the elder Hauser splashed 246 3-pointers (44.5 3P%). According to Synergy Sports, Houser rated as one of the top spot-up players in the nation last season: 1.36 points per possession (69.3 eFG%).

The younger Houser, Joey, averaged 9.7 points and 5.3 rebounds per game in his during his freshman season with the Golden Eagles. Similar to his brother, Joey is an excellent shooter, too (42.5 3P%); both finished with true shooting rates above 58 percent this season.

There’s still plenty of moving and shaking on the horizon with Virginia’s roster. Ty Jerome announced his NBA decision on Monday; De’Andre Hunter should follow suit soon, too. Players like Kyle Guy, Mamadi Diakite and Jay Huff could — and maybe should — test the NBA Draft process, too.

With the Hausers sitting out next season, they wouldn’t be able to play with Guy or Diakite, regardless. However, assuming Huff is still on the roster in two seasons, the Sam and Joey could pair nicely with the 7-foot stretch 5.

Would also note on the Hausers: having all of Jay Huff, Joey and Sam Hauser, Virginia could really spread teams out playing 5-out ball-screen offense in a ridiculous manner. Would need to find the PG (maybe it’s Clark), but man, that’s a dangerous team with the Hausers.

Ty Jerome declares for the 2019 NBA Draft, will hire an agent