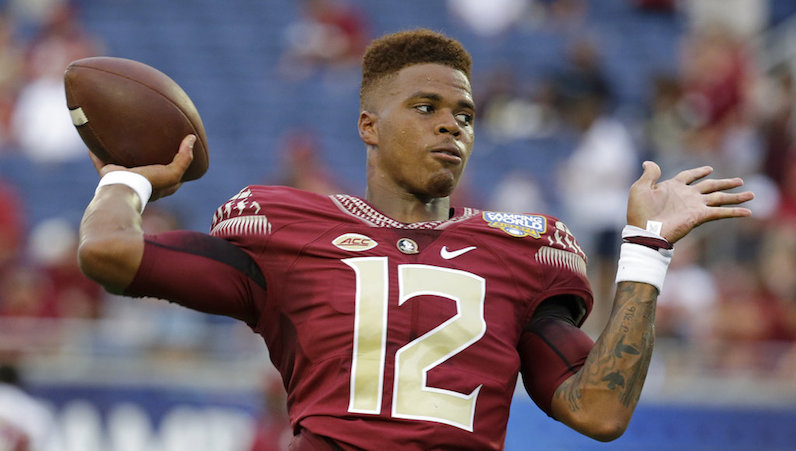 Florida State quarterback Deondre Francois (12) warms up before an NCAA college football game against Mississippi in Orlando, Fla. Florida State, which returns 17 starters from a team that finished 10-3 last year, will find out immediately if it will contend for a College Football Playoff spot. The Seminoles open against Alabama in Atlanta on Sept. 2. (AP Photo)

In less than three weeks, No. 4 Florida State takes on No. 1 Alabama in Chick-fil-A Kickoff. Atlanta and its brand spanking new Mercedes Benz Stadium will be the setting.

It’s certainly a bang to help open up the new 71,000-seat stadium; ticket prices appear to match a very high interest level. This is supply and demand.

This game sold out in early July, and over the last five weeks, ticket prices on secondary markets have gone through the roof.

According to StubHub, the averaged ticket sale price to see Florida State and Alabama play is $845; that makes it the most expensive game of the upcoming 2017 football season.

Three states have accounted for more of the resales than any others, per StubHub: Florida, Georgia and Alabama.

This contest has also, as USA TODAY states, sold more tickets on the secondary market than any other game. The second most sold game also takes place on Sept. 2: Florida-Michigan at AT&T Stadium. However, the averaged ticket price for that contest is significantly cheaper than FSU-Bama — $253.

The power of Notre Dame

You can crack as many jokes as you’d like about Notre Dame going 4-8 last season; I usually chuckle, too. However, Notre Dame football draws a lot of attention, which is reflected in opponent season ticket sales, television ratings and secondary market sales.

Last August, ACCSports published a story with data from another secondary market — Vivid Seats. According to its data at the time, the Irish had a +230% increase on opponent median ticket prices

Obviously, that doesn’t apply to the game in South Bend, where Notre Dame will be the home team. But clearly this program has the ability to draw incredible numbers at home and on the road, across a variety of platforms.

One other ACC team

The only other ACC team to land inside the top 10 in terms of the number of resales — you guessed it, giant-killing Pittsburgh!

Per StubHub, Pitt’s game at Penn State on Oct. 9 ranks No. 8. The averaged resale price for that game is $213.