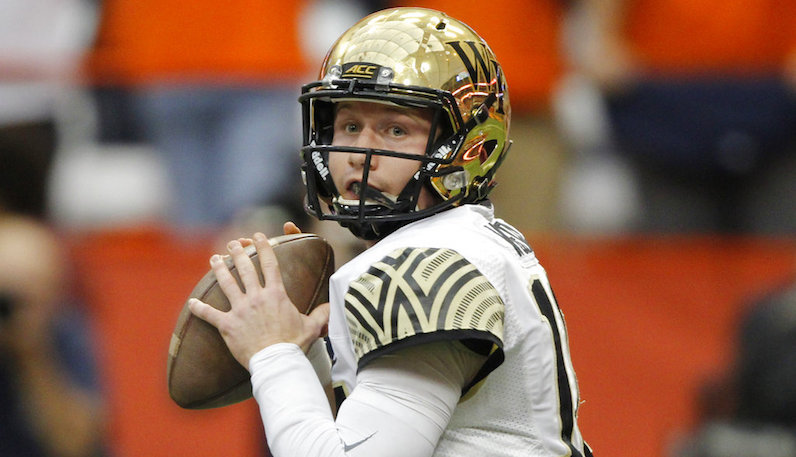 Heading into the 2017 season, John Wolford was certainly an unlikely candidate to be at the top of any list of dynamic playmakers.

Leaving spring football, Wolford seemed an unlikely candidate to even start at quarterback for Wake Forest in the fall.

Yet here we are, 10 games into his senior season, and Wolford is putting together insane offensive numbers, both through the air and on the ground. Wolford now appears near the top of most NCAA offensive statistics, including the efficiency with which he’s compiling those numbers.

Since he returned from a shoulder injury four games ago, Wolford has thrown for 1,407 yards at a 66.7 percent completion rate, and he’s accounted for 12 passing and six rushing touchdowns. The only Power Five quarterback to throw for more yards in the last four games is Baker Mayfield of Oklahoma (1,622).

Even fewer people would have believed Wolford’s stats if you told them that the player who caught 53 passes and scored nine touchdowns in the Deacons’ first eight games — Greg Dortch — didn’t play in the last two games.

Apparently, coach Dino Babers of Syracuse may not yet be a believer. He said in this week’s press conference before his team takes on Louisville: “The biggest thing is is that Wolford is not Lamar. Lamar is the reigning Heisman Trophy winner, and he does everything better than the quarterback at Wake Forest.”

This is after Wolford put up 363 yards passing, 136 yards rushing and accounted for six touchdowns against Baber’s team. Is Babers then anticipating that Jackson will roll up 700 yards of total offense and nine touchdowns against his defense?

(By the way, Wolford accounted for six touchdowns to Jackson’s four in their head-to-head matchup that Wake Forest won 42-32 this year.)

But the comment by Babers — made only four days after Wolford torched the Orange — points to what everyone does when they look at Wolford: They overlook him. After all, he’s not a physical marvel capable of amazing athletic feats.

That player was supposed to be Kendall Hinton for the Deacons. Hinton is clearly more physically gifted, and most observers of the program saw him as the real answer at quarterback, with Wolford as more of a place-holder. Luckily, the staff saw what Wolford was developing into this fall, and made what was then a surprise decision.

And now it’s John Wolford who’s accomplishing those amazing feats. Let’s look at some reasons why.

John Wolford is a senior who has played from his first day, and it shows. He’s able to run a complicated run-pass option scheme with physical skill, but perhaps more important, with mental dexterity.

Wolford is charged with reading the defense both before and during the play and choosing the right option among at least three on every play. He has to be flexible even inside a play to figure out where to attack the weakest spot in the defense.

Wolford does not have a huge arm, but he is accurate. That only pays off, though, if you make the right decisions. He’s been making them again and again this season.

Like Wolford, experience is a key here. The Deacons were forced to start freshman when Wolford arrived, and it didn’t allow Wolford to do much of anything.

Wake Forest was historically bad running the ball, putting all the pressure on Wolford’s arm. When he dropped back, Wolford was constantly under pressure. He was sacked 101 times in his first three seasons, and he took numerous other hits.

But by now, Wolford is taking snaps behind four redshirt juniors and a redshirt sophomore, and his tight end is a redshirt senior. That line has allowed 15 sacks, and only four in the last four weeks. They’re opening holes for a running game averaging 4.6 yards a carry.

In addition, Wolford is not a big quarterback. He’s listed at 6-1, but that could be a stretch. It certainly helps if his line can not just hold off the pressure but also create passing lanes to help his vision.

Offensive coordinator Warren Ruggiero has taken heat over the last two seasons for his play-calling, but that obviously has faded this season (with a few, mostly Florida State, exceptions).

But Ruggiero also was in a difficult spot. His offensive line couldn’t block anyone. Without the threat of the run, the passing game was a non-starter. He couldn’t run his quarterback for fear that he’d get injured, especially last season with Hinton already sidelined.

This season, with all of those options suddenly on the table, Ruggiero has turned from a conservative, “hope the defense can win it for us” coach to calling a more diverse approach. The Deacons are attacking opposing defenses and forcing them into mistakes, something that hasn’t been seen in almost a decade of Wake Forest football.

All of that helps add up to one of the feel-good stories of the college football season: John Wolford — A player who literally took a beating for his program has exploded across the national scene in his final season.