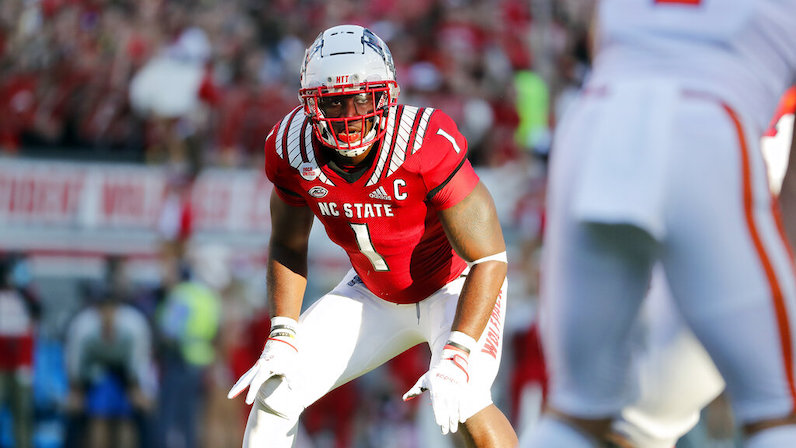 North Carolina State's Isaiah Moore (1) reads the play against Clemson during the second half of an NCAA college football game in Raleigh, N.C., Saturday, Sept. 25, 2021. (AP Photo/Karl B DeBlaker)

NC State has a very good defense. However, the Wolfpack are playing banged up — with season-ending injuries to several key players. During Saturday’s road loss at Miami, NC State suffered another pivotal injury and it was to the team’s most-important defender: redshirt junior linebacker Isaiah Moore.

Moore was injured in the first half of the Miami game; he never returned. Now, Moore will miss the remainder of the 2021 season. Moore is a team captain (for the second straight season) and operated as the play-caller for the defense; this is a crushing loss in the middle of the field.

The Wolfpack were already without All-ACC linebacker Payton Wilson, who suffered a season-ending injury during the Mississippi State loss. Jaylon Scott replaced Wilson in the lineup. Scott has played well, too. However, minus Moore, Scott and Drake Thomas — now the lone returning starter from the 2020 season in the position group — must step up.

Moore leads NC State’s defense with five tackles for loss; he also ranks second on the roster in total tackles (43), behind only Thomas (53). Thomas recorded nine tackles vs. Miami.

Dave Doeren will need additional contributions from another backers, like Devon Betty (seven tackles vs. Miami) and Vi Jones, a hybrid defender.

Jericole Hellsm on playing in front of fans again: “It’s gonna be lovely”