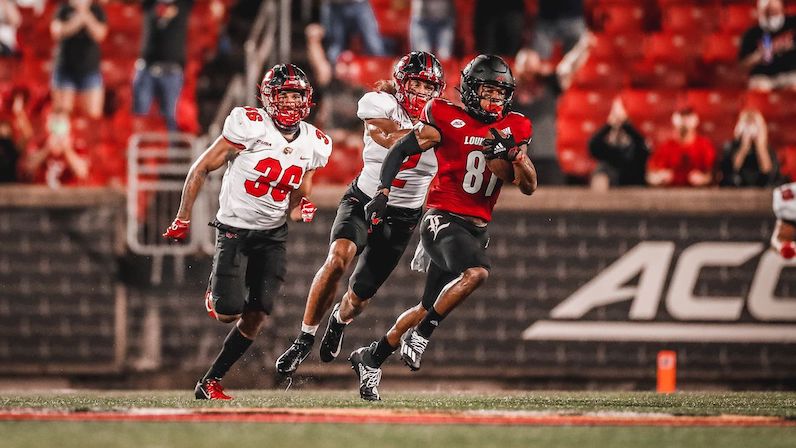 During the first big weekend of the 2020 college football season, 11 different ACC teams took the field — with plenty of highs and lows. (Hi, Florida State!) Let’s go ahead and jump right in with this week’s ACC Football Power Rankings.

Once again, Travis Etienne ran for 100+ yards on fewer than 20 carries.

Something to keep an eye on, though, as the Tigers continue to move forward sans Justyn Ross:

This will seem nitpicky but I think WR remains something of a question mark for Clemson.

In the program’s debut as an ACC football team, Notre Dame wasn’t exactly dominant in victory. A Chase Brice rushing touchdown got Duke within four points of Notre Dame late in the third quarter; however, the Irish pitched a defensive shutout in the fourth, while Ian Book connected with Avery Davis for a 17-yard touchdown pass.

Running back Kyren Williams led the way for Notre Dame on offense: 205 yards from scrimmage (9.8 yards per touch) and two rushing touchdowns.

After a so-so first three quarters against Syracuse, UNC flipped the proverbial switch in the fourth quarter. During the final frame, the Tar Heels outscored the Orange 21-0 — courtesy of three Javonte Williams rushing touchdowns — and emerged victorious, 31-6.

North Carolina’s defense held Syracuse to an average of 2.77 yards per play. Chazz Surratt was a stud in the middle of the field: nine tackles and two sacks.

Sam Howell completed 25-of-34 pass attempts for 295 yards (8.7 yards per attempt), one touchdown and two interceptions.

As expected for the season opener, things were a little choppy at times, but Louisville scored 28 unanswered points and held on to beat Western Kentucky, 35-21. Louisville looked explosive on offense — with quarterback Micale Cunningham having a career night. Cunningham threw for 343 yards (10.1 yards per attempt) and three touchdowns. Wide receiver Dez Fitzpatrick hauled in four passes for 110 yards and a score, too.

The stage is set for a big-ish early-season matchup next weekend: Miami at Louisville.

Quarterback D’Eriq King grabbed the headlines as Miami blitzed UAB 31-14; in his debut with the Hurricanes, King extended his FBS-record streak to 16 games with both a touchdown pass and a rushing touchdown.

However, teaming up with King, running back Cam’Ron Harris made sure UAB was Down and Out: 134 rushing yards and two touchdowns.

Will Mallory with the hole-opening block and Miami answers back, quickly. Cam’ron Harris goes 66 for 6. pic.twitter.com/qvscUS9DRZ

Pitt was dominant to open the 2020 season, destroying Austin Peay 55-0. Along with the shutout, Pitt’s defense, aided by eight tackles for loss, allowed an average of less than 2.5 yards per play

Jordan Mason scored a rushing touchdown, the 15th of his career. But it was freshman quarterback Jeff Sims that made enormous plays down the stretch, and against pressure, for the Yellow Jackets.

Powerful stuff on campus Saturday at NC State as Wolfpack coaches and athletes participated in a march for social justice. Kevin Keatts spoke; Dave Doeren was in attendance.

The initiative was created by PACKUNITED, a group of NC State athletes that have teamed up to confront the variety of racial and social injustices that plague the country.

Redshirt junior linebacker Isaiah Moore, who was named a team captain over the weekend, too, has been a leading voice in these efforts at NC State. Moore will wear the No. 1 jersey for the Wolfpack in 2020.

ICYMI: NC State athletes and coaches marched on campus while others played football.https://t.co/qtr1YunD5B

The start to Virginia’s 2020 season continues to be delayed; however, the launch date will at least come before the month of September concludes. Initially scheduled for Nov. 14, Virginia’s matchup with Duke was moved up to Sept. 26.

It’s hard to judge off a one-game sample — after no football for nine months — especially when it’s against the No. 1 team in the country. We’ll know more by this time next week.

Boogie Basham got his first (of many) sack of the 2020 season, dropping Trevor Lawrence for a 16-yard loss. But it’s important to remember just how much talent departed Wake Forest after the 2019 season: Jamie Newman, Essang Bassey, Amari Henderson, Justin Herron and Sage Surratt, among others.

Wake in Pinstripe Bowl: Nasir Greer out, Essang Bassey had to play safety for first time.

Wake in opener: Essang Bassey and Amari Henderson in NFL, 3 of 4 freshman DBs out, Nasir Greer had to play CB for first time.

Life is a circle.

Boston College opened as a six-point underdog for its matchup with Duke next Saturday.

Following an interception, Florida State marched down the field for a touchdown on its opening drive against Georgia Tech, but after that, wow, things got dicey, quickly. The offense looked anemic. FSU ran for a total of 90 yards; veteran quarterback James Blackman averaged just 4.6 yards per pass attempt.

I say all of this re: FSU for a big reason: Mike Norvell needs YEARS not weeks to fix this (at least in terms of getting FSU to where FSU *should* be).

We all under appreciated how bad it was when Willie took over. Things got worse the next 2 years.

This is a BIG job.

Duke hung tough at Notre Dame, but as the offense struggled to move the ball after the first quarter, the Blue Devils couldn’t quite keep up.

This was a tough start to the year for Syracuse. Similar to the 2019 season, it was a struggle to protect quarterback Tommy DeVito; the Orange allowed seven sacks to UNC on Saturday. In turn, DeVito had issues finding a rhythm: 13-of-31 (41.9 percent) through the air for 112 yards (3.6 yards per attempts).