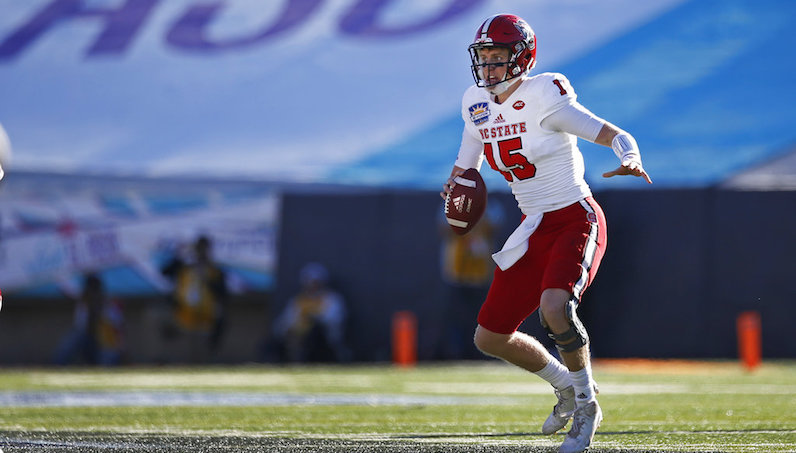 NC State announced Saturday afternoon that quarterback Ryan Finley will return for his final season of eligibility in 2018. The 6-foot-4 quarterback will not enter the NFL Draft.

Finley threw for 3,518 yards this season, which ranks second in the ACC — behind only Lamar Jackson. The Boise State transfer completed over 65 percent of his pass attempts, and accounted for 17 passing touchdowns. According to Football Study Hall, NC State ranked 17th in the FBS in Passing Success Rate (45.9 percent).

Ryan Finley, who was efficient all season-long, and Baker Mayfield are the only two FBS players in 2017 to throw for over 3,500 yards on at least 400 attempts, and fewer than seven interceptions.

In his two seasons at NC State, Finley has started all 26 games, won two bowl games, thrown for 6,573 yards and 35 touchdowns.

This news comes three weeks after defensive end Darian Roseboro decided to return for the 2018 season, too. Next up for NC State: What will Nyheim Hines, star of the Sun Bowl, do? Will Hines decided to enter the draft?

If Hines decides to take off for the NFL, Ryan Finley will still work with a talented offense. Wide receivers Kelvin Harmon, Stephen Louis and Jakobi Meyes combined for 169 receptions and 2,327 yards this season; all three will return for the Wolfpack in 2018.