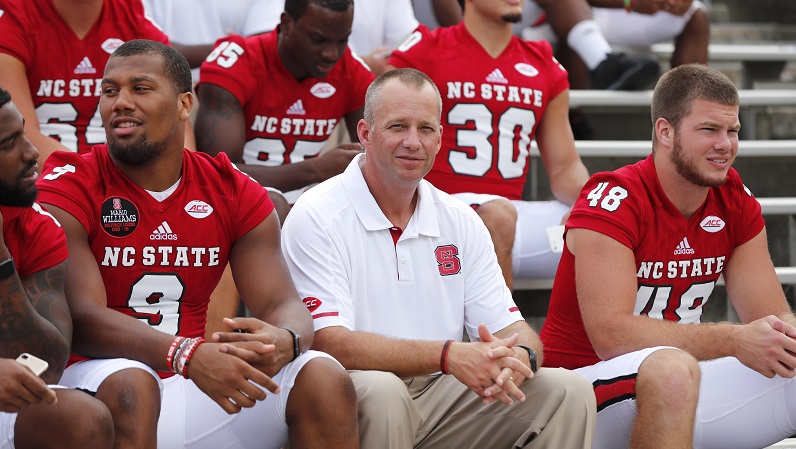 N.C. State head football coach Dave Doeren sits between Bradley Chubb (9), left, and Cole Cook (48) as they get ready to have the team photo taken at Carter-Finley Stadium in Raleigh, N.C., Sunday, August 6, 2017.

Late last week — on Friday night — NC State football wrapped up a busy month of June. The Wolfpack landed a commitment from 3-star offensive tackle Triston Miller, a 6-foot-6 prospect out of Charlotte. Miller is the 11th in-state commit for NC State’s 2019 recruiting class, which ranks 24th nationally, per 247 Sports.

It’s clear: Dave Doeren and NC State are prioritizing North Carolina in 2019. One of the in-state commitments — 4-star defensive end Savion Jackson — is one of the highest-rated recruits in program history.

Miller, who plays his prep ball for Charlotte (NC) Country Day, received nearly 20 scholarship offers; SEC schools like Arkansas, Kentucky and Tennessee all made offers. His commitment to NC State came a week after visiting the campus in Raleigh, which came a week after a visit to North Carolina. His father, Daryl, is reportedly a UNC fan.

NC State’s 2019 class is now up to 15 commitments — with three of those guys hailing from Georgia. The lone commit in that class that’s not from North Carolina or Georgia: long snapper Joe Shimko of New Jersey. In total, NC State received 10 2019 commits in the month of June.