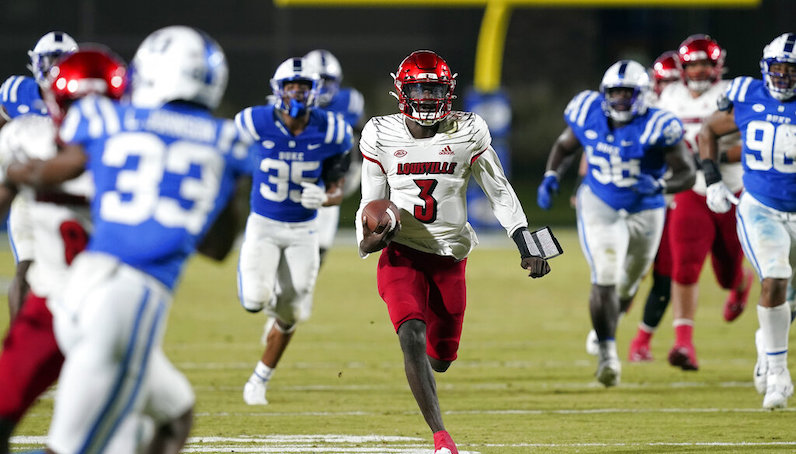 Louisville quarterback Malik Cunningham (3) runs for a touchdown against Duke during the first half of an NCAA college football game in Durham, N.C., Thursday, Nov. 18, 2021. (AP Photo/Gerry Broome)

Malik Cunningham, one of the most electric players in the ACC, announced on Twitter that he plans to return to Louisville for the 2022 season.

During his time with the Cardinals, Cunningham has collected 7,885 passing yards and 61 passing touchdowns, while completing 62.7 percent of his passes (9.1 yards per attempt). However, he does more than just threw the ball and keep the chain moving; Cunningham is an elite runner with the football.

Cunningham finished the 2021 regular season with 19 rushing touchdowns, which ranked second in the FBS and led the ACC. That’s only two rushing touchdowns shy of the 21 Lamar Jackson scored during his 2016 Heisman Trophy season.

For his career, Cunningham has a ridiculous 37 rushing touchdowns.

In the 2021 season, Cunningham threw for 2,734 yards, 18 touchdowns and only six interceptions. Late in the season, he put together a masterpiece as Louisville demolished hapless Duke in Durham: 303 passing yards, 224 rushing yards and seven total touchdowns. In doing so, he became just the second FBS player to throw for 300 yards and rush for 200 in the same game.

Cunningham deserved more recognition than he received for his play in 2021. This was an all-conference type season for Cunningham, who fell below some of the pub for the ACC’s surplus of talented quarterbacks: Sam Hartman, Sam Howell, Devin Leary, Kenny Pickett, Tyler Van Dyke and Brennan Armstrong. Cunningham is in the same tier as all of these guys.

Regardless of who else returns, Cunningham projects as a possible ACC Player of the Year candidate in 2022.

Bronco Mendenhall will step down at Virginia