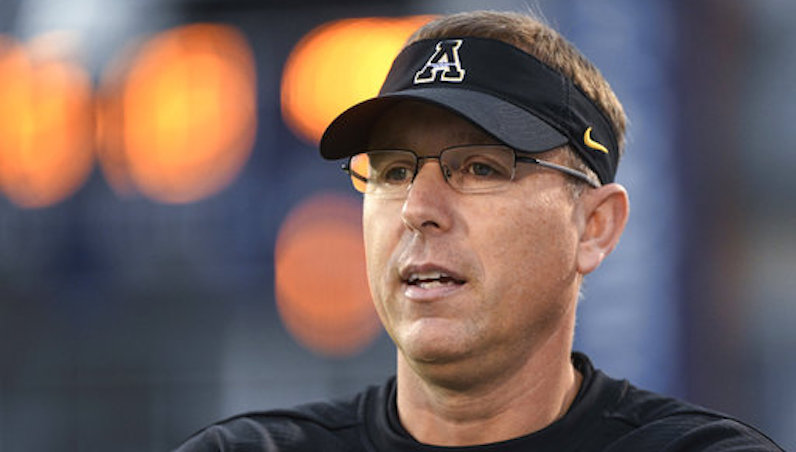 After failing to land Purdue coach Jeff Brohm as the replacement to Bobby Petrino, Louisville football appears to have found its guy. According to multiple media reports, Louisville will hire Appalachian State’s Scott Satterfield. The hire will officially be announced later in the day on Tuesday.

Satterfield, who played quarterback at App State in the 1990s, has spent the better part of the past two decades on the coaching staff up in Boone. However, after one season as the program’s offensive coordinator (2012), Satterfield was promoted to head coach, starting with the 2013 season.

In its final season in the Southern Conference, the Mountaineers won four games in 2013. Satterfield’s second season running the show would coincide with App’s jump to the FBS and the Sun Belt Conference. Since then, App State has been a monster.

The U of L Athletic Association board of directors has announced a series of meetings for 4 p.m. Tuesday. Finance committee at 4, personnel committee at 4:10, full board at 4:20.

Over the last five seasons, Satterfield’s teams never won fewer than seven games; in three of those years, App won 10+ games. The Mountaineers have gone to four straight bowl games and have yet to lose a postseason affair (3-0 in bowl games) under Satterfield. Now that he’s Louisville-bound, though, Satterfield is not expected to coach this year’s bowl game — a matchup with Middle Tennessee State in the New Orleans Bowl.

Under Satterfield, the Mountaineers had a vice grip on the Sun Belt Conference — going 34-6 during his tenure in league play. Outside of the conference, App State has given multiple Power Five teams a scare, too. It took overtime for Penn State to put App State away up in Happy Valley this season; two years back, the Mountaineers nearly pulled off an upset on the road at No. 9 Tennessee.

Satterfield also has some experience matching wits with current ACC head coaches. In the 2017 season, Wake Forest required a fourth-quarter Mike Weaver field goal to escape with a one-point home victory over App State. And back in 2016, Miami traveled up to Boone to face App, winning 45-10.

Earlier this season, Satterfield also helped guide App State to its first ever appearance in the AP Top 25 Poll.