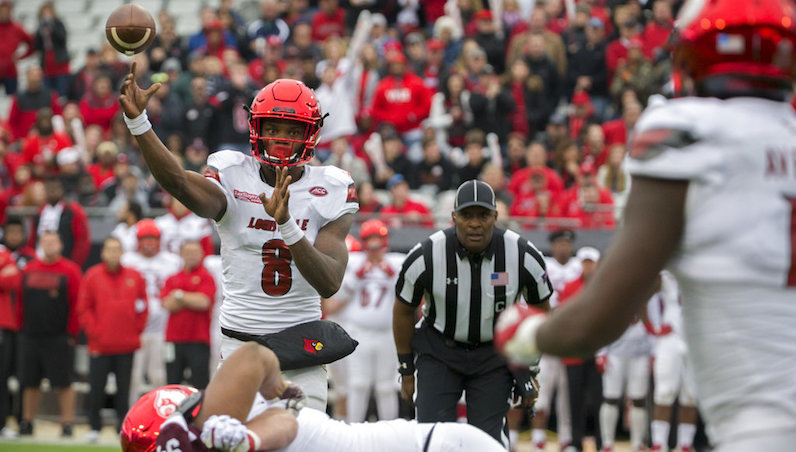 Louisville quarterback Lamar Jackson (8) drops back to pass against Mississippi State during the first half of the TaxSlayer Bowl NCAA college football game, Saturday, Dec. 30, 2017, in Jacksonville, Fla. (AP Photo/Stephen B. Morton)

Louisville’s star quarterback Lamar Jackson plans to forgo his final season of college football and enter the 2018 NFL Draft. This comes two days after a report surfaced that Jackson was inclined to returning as a senior in 2018. Not so, now.

Jackson, the 2016 Heisman Trophy winner, was a basket of excitement and production while at Louisville. In 2017, Jackson threw for 3,660 yards and 27 touchdowns; he also ran for 1,601 yards and 18 more scores. Jackson is the first player in college football history to throw for at least 3,500 yards and run for at least 1,500 yards in back-to-back seasons.

Lamar Jackson has the most yards and was responsible for the most touchdowns in the nation in the last 2 seasons. Baker Mayfield is the only player with a better Total QBR since 2016. pic.twitter.com/skgGuwBKBF

If you add back yardage lost from sacks, which Football Study Hall does, then Jackson ran for 3,655 yards the last two seasons — to go along with 39 touchdowns.

No matter who replaces Lamar Jackson at quarterback for the Cardinals, it’s safe to say that an era has ended for Louisville football.

The Rejection Artist: More on the defense of Anas Mahmoud