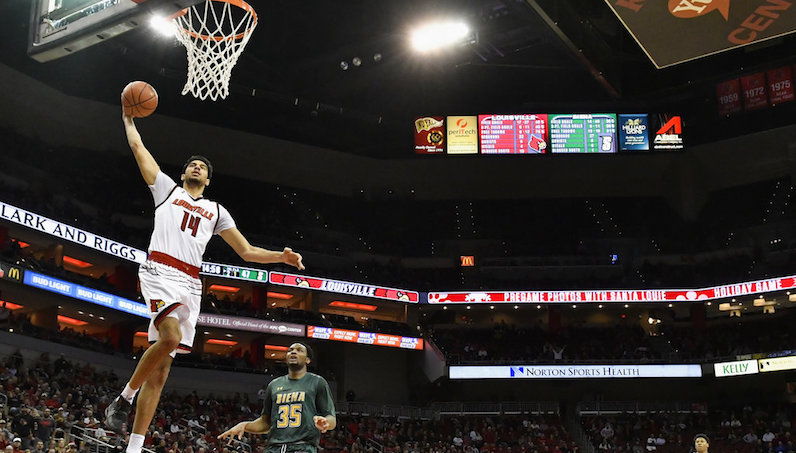 Louisville forward Anas Mahmoud (14) goes in for a dunk ahead of Siena Forward Sammy Friday (35) during the second half of an NCAA college basketball game, Wednesday, Dec. 6, 2017, in Louisville, Ky. Louisville won 86-60. (AP Photo/Timothy D. Easley)

In Louisville’s 86-60 victory over Siena, senior center Anas Mahmoud came very close to putting together a rather rare performance. On 8-of-12 shooting, Mahmoud scored 17 points along with 13 rebounds and nine blocks — narrowly missing a triple-double. But a special kind of triple-double.

According to Sports Reference, only 13 players since the 2010-11 season have recorded a triple-double with points, rebounds and blocks. Not one of those 13 players came from the ACC, either.

The nine blocks are a career-high for Mahmoud, but it’s not some outlier. Earlier this season against Nebraska-Omaha, Mahmoud rejected eight shots. So far this season, only eight Division I players have blocked at least eight shots in a game, including Mahmoud, Ben Lammers and Paschal Chukwu.

For the last two seasons, Mahmoud has been a productive player for Louisville; someone that you knew would put up excellent box score numbers if given the playing time. The 7-foot senior is one of only three players currently averaging at least four blocks per game — along with Minnesota’s Reggie Lynch and future lottery pick Mo Bamba of Texas. He’s doing all of this while also playing less than 26 minutes per game.

Mahmoud ranks seventh in the nation in block rate 16.2 percent, per KenPom. This means when Mahmoud has been on the floor this season he’s blocked over 16 percent of opponent two-point field goal attempts.

With the help of Mahmound, the Cardinals rank 11th nationally in terms of adjusted defensive efficiency, according to KenPom. Opponents are shooting just 33.3 percent on post-up possessions against Mahmoud, per Synergy. On isolation attempts, Mahmoud has held opponents to just 0.31 points per possession (16.7 percent shooting) — No. 15 in the nation.

If Anas Mahmoud keeps this up, his defensive ability could help him make the NBA — a serious goal of his, as he described to David Glenn back in October.