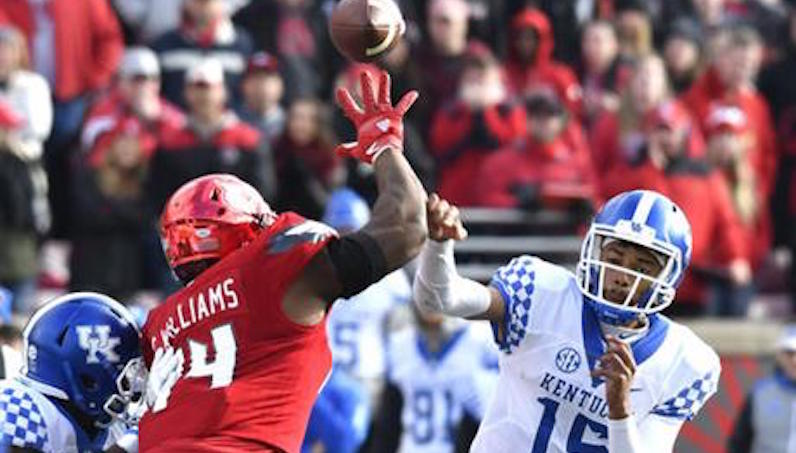 Louisville’s already-thin defensive line rotation took a major hit at the onset of training camp. Chris Williams was kicked off the team for his part in a criminal act against his teammates. Williams is accused of stealing approximately $2,300 from the bank accounts of former teammates Robbie Bell, Tobias Little, and Caleb Tillman.

Without Williams in the fold, the Cards will rely even more heavily on senior nose tackle Kyle Shortridge. Shortridge had 14 tackles last season, and 2.5 tackles for loss. The 6-2, 290-pound nose does a nice job of tying up opposing centers and guards.

Playing behind Shortridge is Tillman and Derek Dorsey, who both redshirted last season. Another backup defensive lineman for Louisville is G.G. Robinson, a sophomore who recorded two tackles in nine games last fall.

In a versatile defensive scheme such as Louisville’s, which varies from a 4-3 to a 3-3-5 to a 4-2-5 look, it’s essential to have a hole-clogging veteran nose tackle, such as Shortridge. It’s also essential to be able to cross up opposing offenses by working in some wrinkles. That’s where veterans Trevon Young and James Hearns enter the mix.

Young has been recovering for well over a year after fracturing and dislocating his left hip during the 2015 Music City Bowl. Young recorded 8.5 sacks for the Cards in 2015, ranking eighth in the ACC and second on the Louisville roster, behind only Devonte Fields.

Young is a hybrid player who combines elements of outside linebacker and defensive end. With his pass rushing ability, combined with Louisville’s overall defensive line depth, Young can be utilized to help fill the gap in Williams’ absence. If he can stay healthy, Young has the potential to be one of the top comeback players in the ACC in 2017.

Henry Famurewa, a backup, can also assist the Cards in this hybrid defensive end/outside linebacker role.

Hearns missed the Citrus Bowl after getting shot in a December off-campus party. At the time of his shooting, Hearns was leading the Cards with eight sacks. Hearns returns this season as a rush end/outside linebacker, capable of playing along the line of scrimmage or dropping into coverage.

Drew Bailey did an admirable job replacing Sheldon Rankins at defensive end in 2016, recording 58 tackles, nine tackles for loss, and two sacks. The Cards desperately need Bailey to stay healthy this fall, because there is very minimal depth behind him.

At the other defensive end spot is De’Asian Richardson, who produced 17 tackles and one pass deflection in nine games in 2016.

All the attrition up front for Louisville may turn out to be a good thing for incoming freshman Malik Clark. A converted linebacker, the 6-4, 235-pound Clark wasn’t highly-regarded as a recruit. But he has a golden opportunity this summer to play his way into immediate action at defensive end.

Why Jaylen Smith must become a No. 1 receiver for Louisville