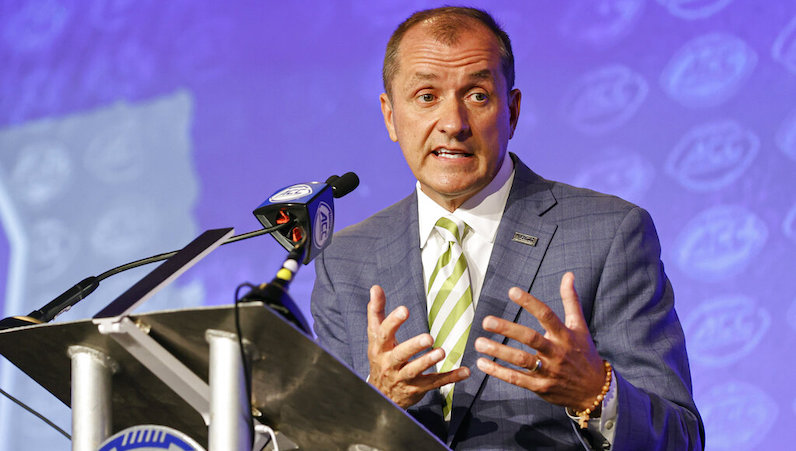 Jim Phillips, the ACC’s commissioner, took to the microphone at the start of the 2022 ACC Kickoff, backdropped by much interest and angst. The world of college athletics, and its intersection television right, has been abuzz for much of the last month. Existential worries over a new age of realignment cloud the intermediate and long-term future of the industry; moves that take place now will have a lasting impact.

During his forum, Phillips touched on a wide variety of topics, including realignment, the revenue gap for the ACC vs. SEC/Big Ten, NIL, CFP expansion, Notre Dame and much more.

With regards to NIL, Phillips expressed a very narrow version of support. Phillips mentioned that he, and many of his peers, view NIL as a net positive. However, Phillips continues to push for a uniform policy on NIL — courtesy of Congress.

Phillips believes a congressional ruling is the only acceptable route forward.

According to Phillips, NIL-type “inducement” payments are impacting recruiting and college athletics in a negative fashion.

As the Big Ten and SEC consolidate more and more bargaining power, the ACC is faced with trying to keep up. It’s an uphill battle, for sure, and one that Phillips seemed foggy on in terms of key directives.

However, Phillips was more direct with his concerns on the marketplace’s current trend lines: “I will continue to advocate for college athletics to be a healthy neighborhood, not 2-3 gated communities.” This was clearly directed at the Big Ten and SEC.

Furthermore, Phillips — as many in college athletics administration do — stated that college sports and the NCAA aren’t professional leagues, catering to a limited number of stakeholders. Phillips continuously brought on the importance of Olympic sports, not just football and basketball.

Phillips says any new NCAA structure must serve many and not a few.

"This is not NFL or NBA-lite."

Phillips believes that expansion isn’t the only path forward for the ACC. He wants to shrink the revenue gap, and the league will consider a variety of options. These movements will include the ACC’s partnership with ESPN.

Often, in his remarks, Phillips felt a little misguided, especially with his preference for the current, seemingly out-of-date college model.

The reaction to this @giglio_OG question from the woman in front of him is priceless pic.twitter.com/kVMyds7rT9

It’s fair to raise concerns and talk about other sports and lower conferences; however, the ACC is in direct competition with two superpowers. The Big Ten and SEC are here to take your lunch money and laugh about it. Phillips offered no tangible solutions for how to handle this threat, although I’m sure there will be plenty of meetings with consultants on the horizon.

Phillips is known for his wariness when it comes to possible playoff expansions in college football — until certain issues are addressed. The ACC voted against expansion last year, although Phillips says he’s supportive of it — if it can be done in a way that’s safe for the sport.

Jim Phillips says the ACC "continues to be supportive" of CFP expansion. It voted against the expansion last year, he says, because issues – such as the new FBS calendar – need to be addressed.

This is where Phillips has chosen to lean heavily into the healthy and safety angle. That make sense; football is a violent game that can do serious damage to its participants. Adding extra games makes more time and punishment dedicated to the sport. Wake Forest coach Dave Clawson has been vocal with his concerns in this regard.

With Phillips, that anxiety feels a little more hollow. This is a guy who is tasked with improving the ACC’s financial status, not the overall health of football players. (Given his frustrations with NIL, it doesn’t seem like Phillips would be concerned with playoff expansion resulting in more unpaid work events for college football players.)

Regardless, Phillips continues to push for a standardized year-round, 365-day calendar for college football. This comes as the result of conversations with ACC coaches and team physicians. Before the sport grows rapidly, additional safety measure must be installed, first.

According to Phillips, “All options must be carefully evaluated,” as the 10 FBS football conference and Notre Dame come together on the model that best position the sport going forward.

Amid concerns that the importance of the CFP has caused the devaluation of other postseason play, Phillips went out of his way to defend the current bowl structure in its entirety — not just the current playoff format. Bowl season, per Phillips, matters to the ACC and the future of college football.

While attempting to focus parts of the conversation on productive business components of the ACC, Phillips continuously mentioned the league’s partnership with ESPN.

Phillips was low on specific detail, but he noted a constant dialogue with ESPN executives — like Jimmy Pitaro (ESPN President) and Burke Magnus (ESPN President, Programming and Original Content).

Additionally, Phillips claims that the ACC Network, which launched in 2019 with plenty of its own distribution issues, is now available in 90 million households.

During this stretch, there was a clear emphasis on football-related content. This goes beyond just games; the league clearly wants more content, including live events, that it can build out as primetime events.

With that in mind, get ready to see more things like caravanning events that include behind-the-scene/exclusive content at various ACC programs, plus more “live” schedule release events.

It’s been a growing concern for several years now, but the SEC and Big Ten, bolstered by successful television networks (ESPN and Fox, respectfully), lap the ACC from a revenue standpoint. Even among Power Five leagues, there’s a massive gap.

👇🏼👇🏼👇🏼this is why grown ass adults are losing their minds right now pic.twitter.com/35FijI83Uw

Keep in mind: the Big Ten is set to sign a new media rights deal worth $1 billion. The SEC won’t be far behind, which raises the concern: where is the ACC?

Down in Charlotte, Phillips stressed the importance of this issue: “It’s been my primary focus.”

The power of the ACC’s Grant of Rights has gone under a good deal of debate the last few weeks. However, the deal, which runs through 2036, is ironclad, which serves the league well from a leverage standpoint. (Of course, the ACC needs to do more than maintain its current structure if its to find footing vs. the SEC and Big Ten.)

Phillips made reference to Oklahoma and Texas, along with USC and UCLA, sticking with their current conferences through the end of their own media rights, as opposed to leaving early. Of note: those deals (Big 12 and Pac-12) run for only a few more years, each, while the ACC’s grant of rights extends for a decade-plus.

Unsurprisingly, Notre Dame was brought up several times during the forum. Converting Notre Dame into a full-time member of the ACC, with football, is a white wale of sorts for Phillips.

During his speech, Phillips made multiple references to the ACC making decisions as a collective of 15 member institutions. Notre Dame is included among these 15 schools, obviously.

Jim Phillips says if there "comes a time" that Notre Dame joins a league, he "feels really good" that the Irish would join the ACC.

Once again, Phillips publicly stated his optimism that if/when Notre Dame joins a league in football, it’ll be the ACC.

Read More on Jim Phillips and the ACC