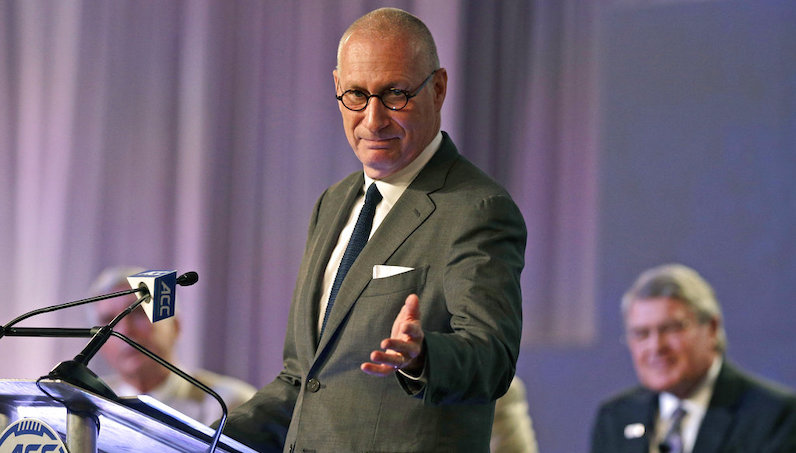 John Skipper is on the Board of Directors with the DAZN Group and co-founder of Meadowlark Media, along with former ESPN personality Dan Le Batard. However, Skipper is also known for his time with ESPN; he joined the company in 1997 and served as its president for several years (2012-17). Skipper is also an alum of UNC.

(Audio via The Dan Le Batard Show and Meadowlark Media)

The conversation touched on a variety of subject matter, including the issues currently facing the ACC and the importance of Notre Dame.

The Luck of the Irish

As one of the most popular brands and teams in college athletics, Notre Dame football holds a lot of the cards. With the exception of the 2020 COVID season, Notre Dame has remained fiercely independent in football.

That independence has created ungodly amounts of cash for Notre Dame. It also places Notre Dame at an obvious hinge point for the future of college athletics: shape, size, scope, everything.

Right now, Notre Dame is the wildcard in this whole thing. They are the single most valuable entity that is not attached to one of these conferences. So they are doing what they should naturally do, which is they’re trying to figure out what they want to do, which is stay Independent.

The program’s current TV deal with NBC will pay out $22 million for the 2022 season. That contract will expire in 2025.

However, as the Big Ten gets set to announce a new media rights deal — in the neighborhood of $1 billion — Notre Dame wants more money. As Skipper notes, NBC may have to break its Peacock-themed bank to afford those broadcast rights.

Notre Dame is in a great position of leverage — because every conference would like to have them. So they’re gonna say to NBC: “You want us to not join a conference? Pay us a bunch of money.”

According to a report from Dennis Dodd at CBS Sports, Notre Dame would remain independent in football if it can find a TV deal that nets $75 million annually. That may seem like a ludicrous amount of money, but for now it’s in the realm of possibilities. At the least, it’s a strong position to start from in negotiations.

Of course, this is the type of figure that must make the ACC’s head spin — as it works to land Notre Dame, while lapped financially by the Big Ten and SEC. Skipper suggests that for a league to land Notre Dame: it should offer to pay it $80 million to not remain independent. Whatever the cost: get it done.

Skipper’s vision for realignment involves four mega-conference, each with 16 teams — for a total of 64. When Texas and Oklahoma transition to the SEC, that league will have 16 teams. The same can be said regarding the Big Ten and the additions of USC and UCLA.

At the moment, there are plenty of road blocks for this vision; things are trending in a different direction, away from this hypothetical four-league, 64-team model.

Currently, the ACC sits at 14 full-time members. If the league could somehow afford Notre Dame, and add another team, then it’s viable in the long-term. Here’s more from Skipper:

If you get rid of a lot of the egos, the traditions, fans, this is easy. You have an SEC with 16 teams in it. 16-team conference is a great size for a conference. You can play everybody within two years. You can have some sense of camaraderie, collegiality, commonality. It’s no longer geographic, though the SEC has a geographic unity. So, they’re OK. 16 teams in the SEC — great. Now, you have 16 teams in the Big Ten — great. Now, you’re halfway home.

The ACC has 14 teams. They kinda have 14.5 because they have half of Notre Dame. The ACC needs to figure out a way to get to 16 teams.

In this structure, as Skipper proposes, there would also be a new College Football Playoff format. Each of the four leagues would send one representative to compete in the new CFP. Under this structure, it would be more palatable for the ACC to pitch Notre Dame on full-time membership, including football: if you want in on the CFP, you must be in a conference.

Read More on John Skipper and the ACC

Did the ACC miss a major opportunity in 2020?