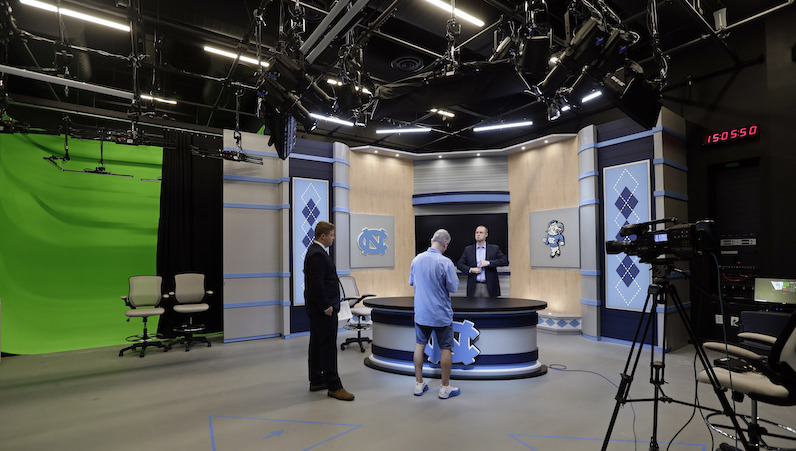 In this photo taken Friday, Aug. 23, 2019, Jones Angell, right, play by play announcer for the North Carolina Tar Heels, prepares for a session in the production studio at the University of North Carolina's ACC Network broadcast facility in Chapel Hill, N.C. The Atlantic Coast Conference finally has its TV channel airing hundreds of league sporting events each year thanks in no small measure to its schools. Administrations around the ACC played a critical role in getting the channel up and running, spending millions to ensure campus broadcast and production facilities were capable of handling telecasts. (AP Photo/Gerry Broome)

The ACC Network launched about a month ago and on Wednesday one of the final major cable/content providers signed on. AT&T U-verse will now carry the ACC Network. This news comes less than a week after North Carolina Governor Roy Cooper urged providers with a costumer base in his state to sign on.

Great that ATT @Uverse and the @ACCNetwork are working to reach a deal. Good news for ACC fans across our state. – RC pic.twitter.com/Yw4yWX8wCn

Back in the middle of August, Spectrum — one of the largest Internet and cable providers in the state of North Carolina — added the ACC Network. Of course, the network can also be found on several streaming platforms, like Sling (which signed on shortly after Spectrum) and YouTube TV.

As Luke DeCock from the News & Observer points out, Comcast/Xfinity really is the last major cable provider to still not have the ACC Network. That’s not great for a lot of fans in the league’s footprint.