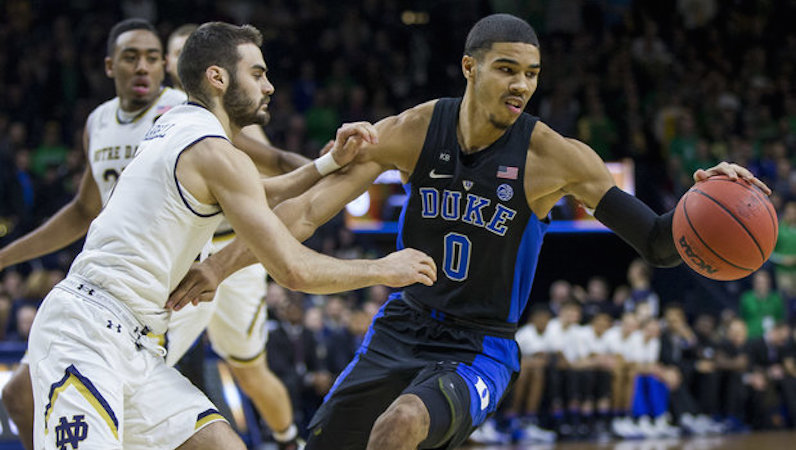 Following a freshman season in which he emerged as one of the nation’s top multi-dimensional players, Duke forward Jayson Tatum will enter the 2017 NBA Draft.

Each of the previous nine Duke freshman in the draft was a first-round selection, including eight lottery picks.

“I have absolutely loved coaching Jayson Tatum,” Duke head coach Mike Krzyzewski said. “His skill set and work ethic will make him a star in the NBA. Whichever team selects him will be getting a humble, thoughtful and talented young man whom we are proud to call a member of the Duke Basketball brotherhood.”

The St. Louis native currently ranks fifth in the ACC in free throw percentage, 10th in rebound average and 12th in scoring.

“I’m excited to take the next step in pursuing my lifelong dream of playing basketball at the highest possible level,” Tatum said. “With that said, I’ve loved my time at Duke. The Brotherhood is a real thing and I’ll always be part of the bond between former, current and future Duke players. I want to thank my teammates, coaches, family and friends for the unwavering support I’ve received as I pursue my dream.”

The ultra-versatile Tatum set a Duke single-season record with six games of at least 10 points/5 rebounds/3 assists/2 steals/2 blocks; those six occasions are also the third-most in Duke history for a career. He is just the third Duke player under Coach K, alongside Parker and Okafor, to average 16+ points and 7+ rebounds as a freshman.

Tatum’s 26 double-figure scoring game and seven 20-point games are also both the 10th-most in Duke history by a freshman.

A three-time ACC Freshman of the Week, Tatum was a third-team All-ACC selection and a member of the ACC All-Freshman Team. He is one of five final candidates for the Julius Erving Small Forward of the Year Award, as well a USBWA All-District III honoree.