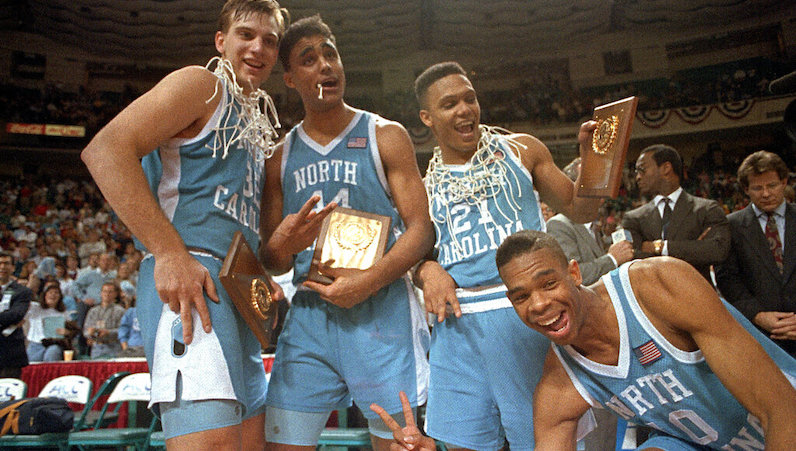 It’s hard to believe Duke-North Carolina, Part 1 is already upon us. This Saturday (Feb. 5), the Blue Devils will travel a couple miles south along 15-501 for a matchup with the Tar Heels. Mike Krzyzewski will coach one last time in Chapel Hill.

For North Carolina’s Hubert Davis, this will be his first matchup with Duke as the program’s head coach. He’s certainly competed in plenty UNC-Duke games over the years — first as a player, then as an assistant coach under Roy Williams.

Despite the heated rivalry, UNC and Duke guys can still be friends. During the weekly teleconference with ACC coaches, Davis mentioned how he became good friends with Christian Laettner when they played in the NBA together — with the Washington Wizards and the Dallas Mavericks.

According to Davis, the old Blue Blood counterparts (turned teammates in the NBA) played a lot of ping pong together.

Davis and Laettner overlapped perfectly during their college careers. Both competed in the Duke-UNC rivalry and the ACC from 1988-92.

As it happened, Virginia head coach Tony Bennett was the next ACC coach to speak on Monday’s call, following Davis. Bennett caught the last little bit of Davis talking about Laettner. After Davis left the call, Bennett chimed in and mentioned that he competed in the 1991 Pan Americans Games with Laettner and Grant Hill, another former Duke star.

According to Bennett, once again, ping-pong was the game of choice: “Laettner and I got to know each other; we would have wars.”

From the sounds of things, we may need to organize an ping-pong tournament at some future ACC Men’s Basketball Tournament or Operation Basketball.