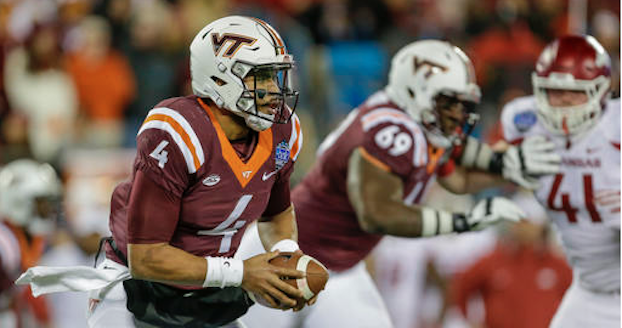 Jerod Evans announced Monday that he will enter his name in the 2017 NFL Draft. (AP Photo)

Jerod Evans’ first season in the ACC will be his last.

The Virginia Tech quarterback announced on Twitter Monday that he will enter the 2017 NFL Draft:

Evans enrolled at Virginia Tech last spring after becoming one of the nation’s top junior college quarterbacks. This season, he completed 63.5 percent of his passes for 3,546 yards and 29 touchdowns (with eight interceptions). Leading the Hokies to a 10-4 mark, capped off by a Belk Bowl victory over Arkansas, he also posted 846 yards and 12 scores on the ground.

The 6-4, 230-pound quarterback had one season of eligibility remaining.

No looking back. Thank you for everything Hokie Nation! #ProudHokie pic.twitter.com/CbipqnE7Tz

Ford, who is the only player in program history to tally 1,000 receiving yards in a season, accomplished that feat each of the last two seasons. The junior finished this fall with 79 catches for 1,094 yards and seven touchdowns.