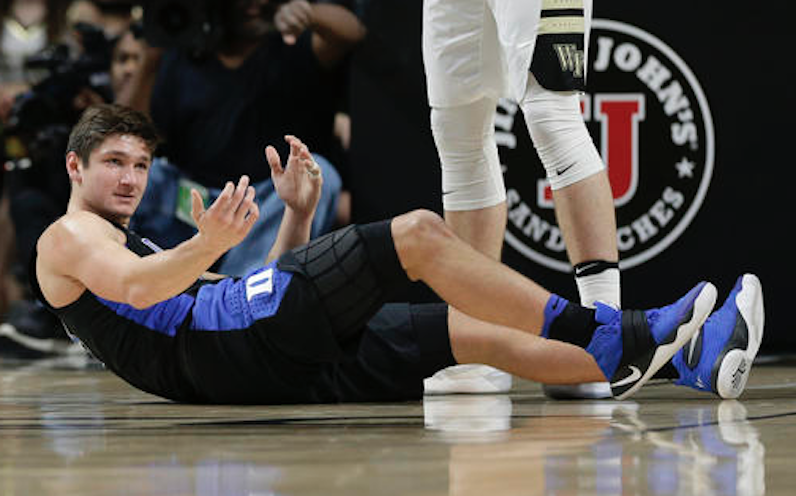 Stop me if you’ve heard this before: Grayson Allen may or may not have pulled a dirty move in Duke’s last game.

Oh, so this isn’t the first time someone has brought this up?

Over the last couple of months, it’s become a weekly tradition to pull a few seconds of video from a Duke matchup and dissect it, itching to find anything we can to hold against Allen. The latest “incident” took place Monday at Notre Dame:

Had that been any other player, this wouldn’t have been anything more than a mundane sequence within a game. But it’s social-media-worthy, because “Grayson Allen.”

It’s not difficult to understand why Allen has a larger target on his back than any other player in college basketball. If you need a reason, there’s this. And this. And, most notably, this.

The technical foul against Elon this past December led to what Mike Krzyzewski announced as an “indefinite suspension” for Allen. Fans and media alike mocked the Blue Devils program when that suspension turned out to be one game. But don’t make the mistake of assuming the consequences stopped there.

Allen is the most hated player at every away arena in which he plays. On Monday at Notre Dame, the Fighting Irish faithful viciously booed him every time he touched the ball. When the Blue Devil junior stepped to the free-throw line, they chanted expletives at him.

In addition to the heckling, though, there’s always a camera waiting for Allen’s next slip-up.

It started with Duke’s win over Boston College on Jan. 7 — Allen’s second game back from suspension. This shot left fans wondering, “Is he already back at it?”

Three days later, it turned into, “Did Grayson Allen shove that coach?”

That coach was Florida State assistant Dennis Gates, who made it clear on social media that he didn’t sense any malicious intent. But the trend of scrutinizing Allen continued.

Eventually, Duke interim head coach Jeff Capel called out the media for going overboard with the coverage. That didn’t stop ESPN from highlighting an encounter Allen had with NC State’s Terry Henderson going into a timeout during a Jan. 23 contest:

Opposing players are fully aware of Allen’s reputation, making it possible for any routine moment to escalate into a heated exchange in the blink of an eye. That’s exactly what happened this past Saturday at Wake Forest:

And remember, the cycle isn’t complete until the media picks it apart. One website posted that footage from Winston-Salem and rolled with the headline, “Duke’s Allen ignites yet another brawl.”

People generally take one of two sides on the Allen controversy. Those in Duke blue stomp their feet — why is poor, persecuted Grayson facing so much criticism when everyone makes mistakes? Then, there’s the crowd that wants to see Allen and the Blue Devils fail — why hasn’t he been kicked off the team?

Regardless of where you stand, everyone can agree on this: The scrutiny isn’t going to stop as long as Allen dons a Blue Devil uniform.

The junior brought this on himself. While some of the commentary has been over the top and inappropriate, none of it exists without Allen’s habitual missteps. His actions drew a one-game suspension in the short term, but the real punishment is what he’s facing now. This is an All-ACC player who’s averaging 15.6 points per game. He’ll hear his name called in this summer’s NBA Draft. Despite all of that, everything we’re talking about has to do with his maybe-or-maybe-not dirty play.

It affects the team as well. Duke entered this season as the nation’s preseason No. 1 squad. Injuries and the ongoing absence of Krzyzewski have them at No. 21 going into February, and if the 2016-17 Blue Devils are ever going to click, they’ll have to do so with a walking distraction in the backcourt.

Duke doesn’t have the look of championship team right now, but that could change. The way we cover Allen for the rest of his college career, however, will not.