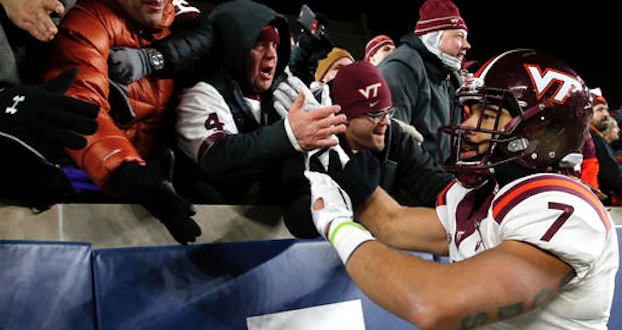 Bucky Hodges has a shot at becoming a first-round NFL Draft pick should he declare this offseason. (AP Photo)

In the midst of Virginia Tech’s first ACC Championship Game appearance since 2011, several Hokie players have decisions to make in the coming weeks. Multiple underclassmen, including tight end Bucky Hodges, wide receiver Isaiah Ford and cornerback Brandon Facyson, are in position to get selected in April’s NFL Draft should they choose to declare.

CBS Sports currently projects Hodges as a top-30 prospect with a late-first-round/early-second-round projection. Coming off a regular season in which he recorded 42 catches for 598 yards and seven touchdowns, Hodges elevated his stock to emerge as CBS Sports’ No. 2 tight end prospect, behind only Alabama’s O.J. Howard. For most players, that’s good enough to leave college.

Ford also enjoyed another monster regular season. The junior playmaker has recorded 69 receptions for 949 yards and seven touchdowns, despite being a primary focus of opposing defenses.

Ford has nothing left to prove at the collegiate level, having recorded 144 receptions and more than 2,100 receiving yards over the last two seasons at Virginia Tech. The No. 62 overall draft prospect in CBS Sports’ rankings, Ford projects to as a second- or third-round pick should he leave.

Facyson’s decision will be tougher than those of Hodges and Ford, whose current projections merit strong consideration for going pro. That’s because Facyson, like many others around the country, is in the gray area of mid-to-late-round projections, where he could be anything from a fourth-rounder to an undrafted free agent.

The No. 117 overall prospect and the 14th-ranked cornerback, Facyson will have to shine at the NFL Draft Combine in Indianapolis to assure an early-round selection. On the other hand, the corner could return to Blacksburg next fall and be an All-ACC candidate, improving his stock for the 2018 NFL Draft.

The good news for Hodges, Ford and Facyson is that all three have the ACC Championship Game and a bowl game to move the needle even higher before they have to make their respective decisions.