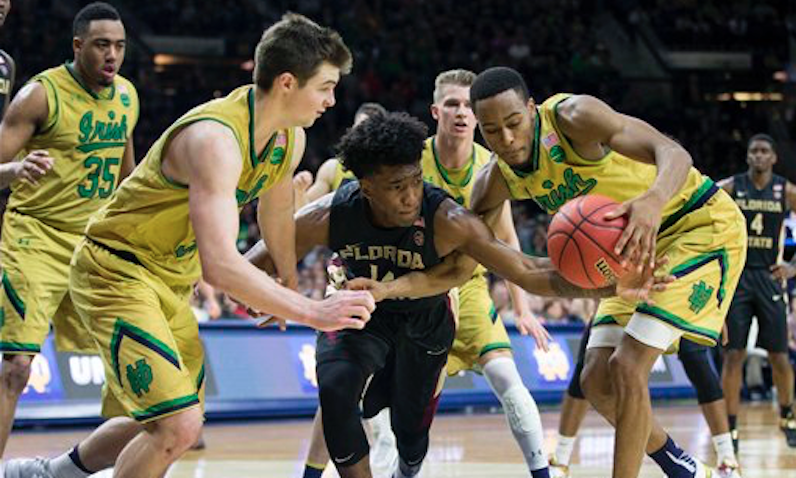 Florida State’s three-game winning streak came to an abrupt ending on Saturday night as the Seminoles were handled in South Bend by Notre Dame, 84-72.

With the loss, FSU fell to 21-5 on the season but just 2-4 on the road in ACC play. The Seminoles’ play on the road has been cause for concern, and it’s true that FSU has played markedly worse away from home. At the Donald L. Tucker Civic Center this season, FSU is a perfect 16-0.

It’s true that in each of Florida State’s four road losses, the Seminoles have left something to be desired. All four defeats have come by double figures, but losses at North Carolina and Syracuse were closer than the final score indicated.

In the loss at UNC, the Seminoles were within four with less than five minutes to play and on the foul line shooting two. Against Syracuse on Jan. 28, FSU was down by two with less than two minutes left but couldn’t get timely stops or baskets down the stretch.

Neither one of those losses are particularly embarrassing. North Carolina currently has the best record in league play at 9-3 and has yet to lose at home. Syracuse just suffered its first ACC home loss against Louisville on Monday, and that came in overtime. In addition to FSU, the Orange also defeated Virginia.

In road losses to Georgia Tech and, most recently, Notre Dame, the Seminoles were handled from the start. FSU trailed by as many as 28 at Georgia Tech in the first half before falling 78-56 on Jan. 25. Saturday’s 84-72 loss in South Bend probably wasn’t as close as the final score indicated.

Notre Dame, however, is a Top 25 team that reached the Elite Eight each of the last two seasons. Georgia Tech, in its own respect, is a very good team at home. In Atlanta this season, the Yellow Jackets have also defeated Notre Dame and North Carolina. The Yellow Jackets handily beat the Tar Heels, 75-63.

While many like to point to Florida State’s 2-4 ACC road record as a glaring concern, only Louisville and Virginia have winning records away from home in conference play. Last season’s ACC Tournament champion, Notre Dame, finished just 4-5 on the road in ACC play.

With four of Florida State’s five losses coming on the road and in conference play, what often gets ignored is FSU’s two road victories. The Seminoles’ 60-58 win in Charlottesville on Dec. 31 still serves as Virginia’s lone home defeat in conference. FSU’s 75-57 win at Miami served as the Hurricanes’ largest margin of victory this season.

Some will point to the fact that Florida State’s struggles away from home could be a concern when the postseason rolls around, but the Seminoles won’t be playing true road games in either tournament. Currently slated by the NCAA tournament Selection Committee as a No. 2 seed, FSU likely needs just to nab a No. 4 seed or better to play games in the rounds of 32 and 64 in Orlando. The Seminoles are 18-0 in the state of Florida this season.