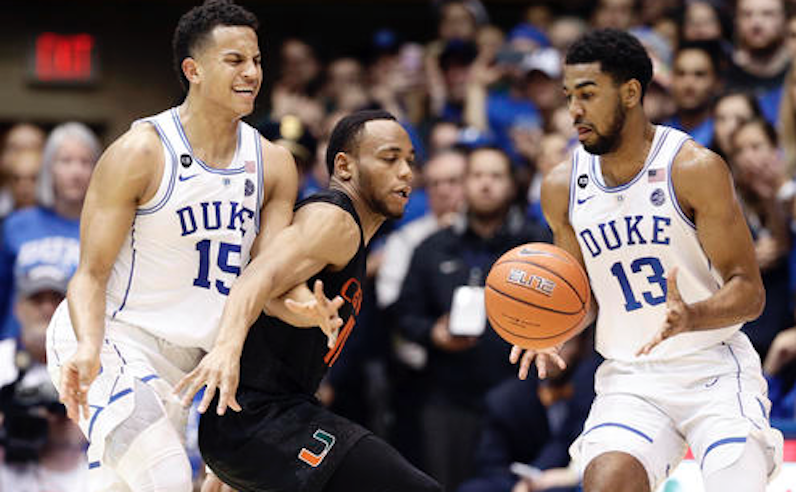 Duke senior guard Matt Jones is contributing in a variety of ways this season. (AP Photo)

There are times, when assessing Duke’s basketball roster, that Matt Jones looks like a role player at best.

While freshmen like Jayson Tatum and Harry Giles are projected as first-round NBA draft picks next season, you won’t find scouts clamoring about the 6-5 Jones’ game.

Yet Jones keeps showing up in important situations and delivering, which is why he found himself back in the starting lineup on Monday night against NC State.

Though he and Luke Kennard are the only of Duke’s main players who have been uninjured and available for all games, Jones has twice fallen out of the starting lineup.

Both times, Duke’s staff turned back to him and he found himself right back in Duke’s starting five.

Jones responded by recording two backcourt steals in the first three minutes of the half. He hit an open three-pointer and a baseline jumper.

The senior knocked the ball free to force another turnover that led to another basket and would hit three shots from three-point land while Duke turned a double-digit deficit into a double-digit lead.

Duke lost 84-82 that evening, meaning more changes could be coming to the Blue Devils starting lineup as Capel tries to get the team out of its funk.

Jones had 11 points with three assists and two steals against the Wolfpack.

After NC State had erased a 12-point deficit to take a 51-48 lead, Jones’ big plays turned the game back in Duke’s favor.

He drilled a three-pointer from the left corner in front of the Blue Devils bench to put Duke in front with 11:20 to play. Fourteen seconds later, Jones stole the ball from NC State’s Dennis Smith to start a Duke fast break. It ended as Jones lofted a pass toward the rim and Frank Jackson slammed it home.

Though that flurry put Duke back in front, the Blue Devils couldn’t hold on to a nine-point lead over the game’s final seven minutes.

So Duke now has lost three times in its last four games.

Where does Jones fit in? It could be anywhere. At times this season, Jones has helped handle the ball as point guard. He’s played shooting guard or small forward, and he’s one of Duke’s two remaining team captains, along with Amile Jefferson.

Duke’s coaches find him an important player, either as a starter or off bench, in a backcourt rotation that includes Grayson Allen, Kennard and Frank Jackson.

He also accepts the burden when the Blue Devils don’t play well, like when that lead melted away against NC State.

“It started with me,” Jones said. “I didn’t do a good job playing defense and I think that carried over to everyone. I take all responsibility for it.”

That’s one of many roles Jones fills for Duke.