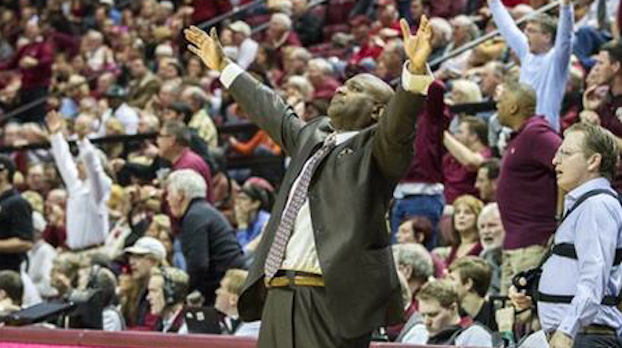 For the second year in a row, Leonard Hamilton has put a one-and-done player in the NBA Draft. (AP Photo)

Don’t look now, but Florida State may be on the verge of gaining some respect as an NBA Draft factory.

The Seminoles may have only two players currently in the NBA in Denver Nuggets guard Malik Beasley and Miami Heat forward Okaro White. However, that number could soon double.

After a season that resulted in 26 wins and a No. 2 seed in the ACC Tournament, three Seminoles declared early for the NBA Draft. Jonathan Isaac, a lock for the lottery, was one of them.

Prior to the 2015-16 season, FSU had never produced a player who declared for the NBA Draft after just one season. Beasley became the first to do so, and Isaac followed suit just a couple of months ago.

Isaac could become the highest draft pick in FSU history. That distinction currently belongs to Hall of Fame forward Dave Cowens, who went fourth overall to the Boston Celtics in the 1970 draft. Bacon also projects as a draft pick, while Xavier Rathan-Mayes is more of a long shot.

With the Seminoles set to have multiple players drafted for the first time since 2010 when Solomon Alabi and Ryan Reid each went in the second round, the question then becomes who is next?

The most likely option is probably incoming 4-star guard M.J. Walker. A McDonald’s All-American, Walker surprised many when he committed to FSU. However, it would shock few if he leads the Seminoles in scoring as a freshman in 2017-18.

Walker was a top-30 player, according to the 247Sports’ composite rankings; he is a natural scorer. If everything goes right for him, Walker could give FSU a “one-and-done” for a third straight year. Whether or not that happens, Walker leaving early before exhausting his eligibility is probably a safe assumption.

Though Walker is the FSU player most likely to end up in the NBA, the possibility is not limited to him. Terance Mann, C.J. Walker, Trent Forrest, Christ Koumadje and incoming freshman Ikey Obiagu could each fall under that category.

Mann has NBA athleticism, defends well and fills up the box score while being an efficient offensive player. Questions linger, however, on whether he’s skilled enough to contribute offensively at the next level.

Walker and Forrest are likely four-year players who could be fringe NBA contributors if they reach their full potential. With Koumadje and Obiagu, the appeal is the size.

Koumadje, at 7-4, is the tallest athlete ever to attend FSU. But he has work to do when it comes to strength, physicality and polishing his offensive game. With Obiagu, who stands at 7-feet, the concerns are similar, although the incoming freshman is a better athlete with more upside and already a more developed NBA body.

Despite losing their top three scorers early to the NBA Draft, the Seminoles have reason for optimism moving forward. They are continuing to put together a deep, talented roster and should fight for an NCAA Tournament spot again in 2018.

While FSU might not have the NBA talent it did last season, it still has that sort of potential. In a day and age where one-and-dones are common, 68-year-old Leonard Hamilton seems to have no problem adapting to the times.