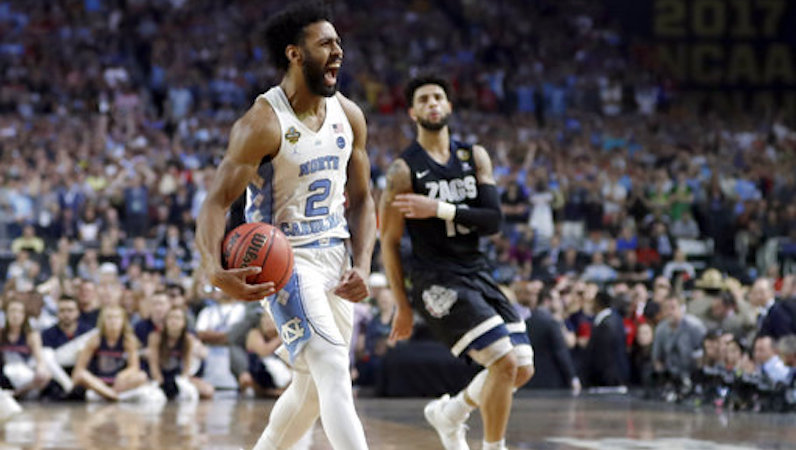 With the April 23 deadline to declare for the NBA Draft approaching, UNC’s Joel Berry has a decision to make.

The point guard’s draft stock hasn’t changed in recent weeks — at least not drastically. In the latest DraftExpress Top 100 rankings, he moved up from No. 91 to No. 86.

The junior sits well outside of the first-round conversation. That may not be the only factor at play, however.

Berry is getting a national championship ring. His legacy at UNC is secured with his Most Outstanding Player selection at the Final Four in Glendale, Ariz. His jersey will hang honored in the Dean E. Smith Center rafters.

In addition, classmate Justin Jackson is moving on.

Is Berry simply ready to move on to his professional career? And could he eventually work his way into the NBA, even if it means spending some time in the D-League? These are questions that prospcets often weigh.

Without Berry, UNC’s backcourt would have a much different look. The veterans of the group will be rising senior wing Theo Pinson and rising junior shooting guard Kenny Williams.

Sophomores Seventh Woods and Brandon Robinson, and freshmen Jalek Felton and Andrew Platek, will all get opportunities to show what they can do. Woods and Felton are point guards who would compete for Berry’s minutes.

If Berry were to return, UNC would once again be a favorite in the ACC. Not only could he contend for national player of the year honors, but a third straight Final Four trip would be a possibility with the Apopka, Fla., native back in Chapel Hill.

The outlook would be less clear without Berry.

Even if Berry declares for the NBA Draft, he’ll have until May 24 to withdraw if he doesn’t hire an agent.

Williams would love to have his tough, scrappy point guard back. If Berry departs? North Carolina will soon learn what type of depth it has built in the backcourt behind the All-ACC guard.