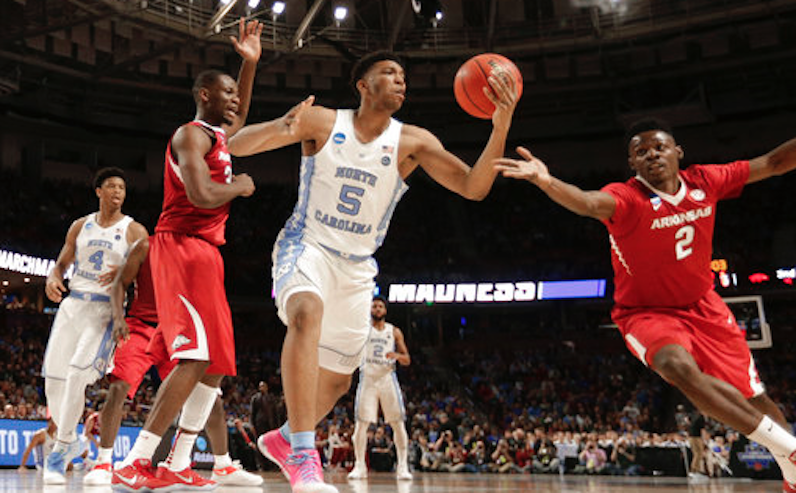 Collegiate underclassmen have until midnight on April 23 to declare for the NBA Draft. For reigning national champion North Carolina, that means all eyes will be on junior point guard Joel Berry and freshman center Tony Bradley over the coming days.

Bradley, of course, already told reporters after the national title game that he would test the NBA waters. He really raised eyebrows, though, when he noted that he “might” hire an agent, which would end his college career.

Even if the Bartow, Fla., product doesn’t hire an agent by Sunday, he has until May 24 to decide for sure. Should he return, it would erase a significant question mark in the Tar Heels’ frontcourt. Should he leave, however, it could solve a bigger — albeit less obvious — problem.

There’s no question that UNC’s 2017-18 squad would be better with Bradley than without him; that’s not up for debate. Playing behind a talented veteran in senior Kennedy Meeks, the rookie averaged only 14.6 minutes per game, but his 17.6 points (on 58.2 percent shooting) and 13.2 rebounds per 40 minutes show just how productive he was when on the floor.

Without Bradley, next season’s projected Tar Heel frontcourt as it stands today would include stretch 4 Luke Maye and two incoming freshman centers in Brandon Huffman and Sterling Manley — both of whom rank outside the nation’s top 150 in 247Sports’ composite ratings.

So how would Bradley departing be a positive for North Carolina? Think long-term, and think recruiting.

The Tar Heels’ recruiting struggles in recent years have been no secret. According to Scout.com rankings, Roy Williams signed nine players ranked in the top 10 of their respective classes from 2004-11. Since then: UNC has reeled in just one.

There’s no question that part of that is due to an NCAA cloud that has hovered over the school for more than half a decade. However, that doesn’t tell the whole story.

North Carolina hasn’t produced a one-and-done player since Brandan Wright in 2007. Ever since, prospects’ desire for instant gratification has only grown, and options beyond the college level have become more attractive.

Over the last decade, UNC’s freshmen returned to school while other bluebloods such as Duke, Kentucky and Kansas sent several rookies to the NBA. Recently, Williams has acknowledged the perception that he forces underclassmen to stay in school despite NBA potential. It’s a perception that the North Carolina coach contests is false.

Williams has an argument, too. According to DraftExpress, since Wright declared for the 2007 NBA Draft, former Tar Heels Ed Davis, Harrison Barnes and James Michael McAdoo all projected as lottery picks immediately following their freshman campaigns. But all three returned to Chapel Hill for their sophomore campaigns.

Regardless, as other programs tout their one-and-done prospects to 5-star phenoms, UNC’s “could’ve been” examples carry little weight.

If the freshman center stays in the 2017 draft and lands in the first round, it would be a win-win for both parties. For the player, it would be the realization of a professional dream. For the program, it would be the success story that all top-end hoops prospects yearn to hear.

DraftExpress doesn’t list Bradley in its 2017 mock draft; the website instead projects him as the No. 24 overall pick in the 2018 draft. But don’t rule out the possibility of the big man working his way into the first round this summer.

Bradley is a 6-11, 240-pounder who runs the floor tremendously well and possesses both scoring and rebounding ability. He also showed flashes of a smooth jumper during his freshman season.

Such players are always in demand.

For those who declare for NBA Draft early entry, the next month will include individual workouts. For a select group, it will also include the NBA combine. With an impressive showing, Bradley could convince a franchise to take a chance on him in the first round; that would mean a guaranteed contract.

How much that scenario would help UNC on the recruiting trail remains unknown. Within the 2018 recruiting class, the Tar Heels are already heavily involved with combo forward Zion Williamson and shooting guard Romeo Langford — both blue-chip players. If a recent one-and-done product, combined Williams’ third national championship, leads to one or both of those prospects donning Carolina blue at the college level, it could help the Tar Heels gain recruiting momentum and put the stigma behind them.

Decisions to be made in the coming days and weeks will impact UNC basketball considerably. What’s best for the program in the short term might not be what’s best in the long term, and vice versa.

Either way, Bradley will help the Tar Heels, whether it’s by bolstering the team’s frontcourt next season or by showing that North Carolina does indeed have an express lane to the next level.