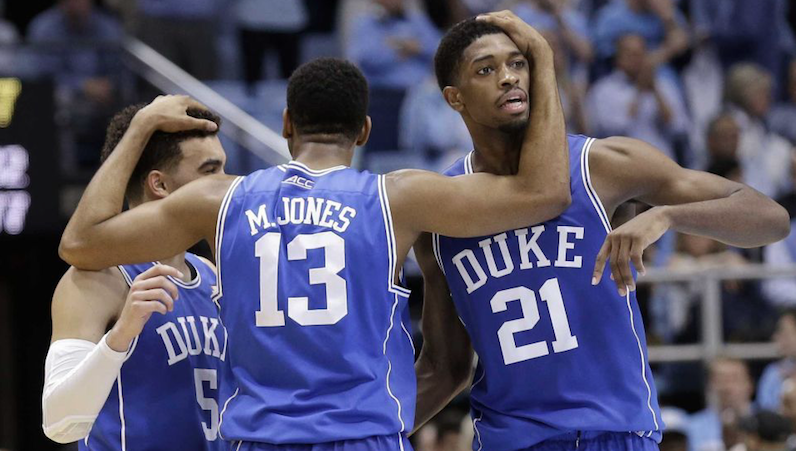 Matt Jones (13) and Amile Jefferson (21) have been on Duke's roster for several Blue Devil wins over UNC. (AP Photo)

The Duke-UNC rivalry has certainly been enjoyable for Matt Jones and Amile Jefferson.

Senior captains this season, both have helped the Blue Devils dominate the intense series during their time in Duke uniforms.

Duke is 6-2 against UNC over the last four seasons since the 6-9 Jefferson arrived on campus in 2012. Since he was injured for the two games last season and on his way to receiving a medical redshirt, Jefferson is 5-1 against UNC in games in which he’s played.

Jones, a 6-5 guard, has played in six Duke-UNC games over the past three seasons with the Blue Devils winning four and the Tar Heels just two.

Those sparkling records should be taken in context when it comes to Duke’s two most experienced players, though. They have been complementary players in the process for the most part while current NBA players like Tyus Jones, Jabari Parker and Brandon Ingram were providing the bulk of Duke’s points.

Jefferson averaged a double-double in his nine games last season before being sidelined with a broken foot. He’s averaging 12 points and 9.2 rebounds this season.

But, of the six games he’s played against UNC, Jefferson has reached double figures in scoring once. That was on Feb. 18, 2015, when he scored 13 points and grabbed five rebounds in 29 minutes as Duke won 92-90 in overtime at Cameron Indoor Stadium.

Jones has never scored more than five points against the Tar Heels. His best overall game, coincidentally, also came in Duke’s 92-90 overtime win in 2015. He scored five points and had five rebounds in 27 minutes.

Given the makeup of this year’s team, though, Jefferson and Jones figure to play significant minutes when UNC comes to Cameron to play Duke on Thursday night.

Since UNC is deep and talented at the post positions, Duke will need Jefferson to be effective. In past games against the Tar Heels, fouls have plagued him to limit his effectiveness. When UNC beat Duke 74-66 on Feb. 20, 2014 at the Smith Center, Jefferson committed four fouls and scored only two points in 23 minutes.

If that kind of thing happens again Thursday night, Duke will have to turn to players such as Harry Giles, Marques Bolden, Chase Jeter and Antonio Vrankovic.

That would certainly hurt Duke’s chances and could damage the sterling record Jefferson, and Jones, have against UNC.