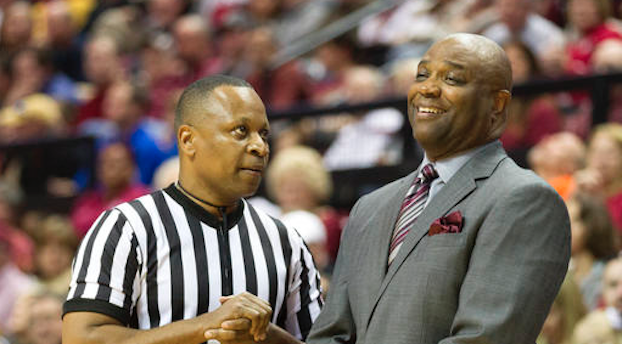 Florida State is without question a football school, but the Seminoles’ men’s basketball squad has the look of an NCAA tournament team once again.

Leonard Hamilton’s squad won its sixth straight in an 83-78 home victory over rival Florida on Sunday. The team is 10-1, and at No. 23 in both polls, FSU has its highest national ranking in nearly five years.

With program morale up, Hamilton is looking more like someone who could win a third ACC Coach of the Year award and less like someone on the hot seat.

His future in Tallahassee looked uncertain last season. FSU’s NCAA tournament chances were killed largely due a five-game losing streak late in the season. Valparaiso bounced the Seminoles in the second round of the NIT.

Fans were discouraged by Florida State underachieving despite having one of the nation’s top freshman tandems in Dwayne Bacon and eventual NBA lottery pick Malik Beasley. Two losses to Virginia Tech and one to Georgia Tech magnified the scrutiny late in the season.

As some fans called for Hamilton’s job, the outrage grew once the school gave him a contract extension. Now, the winningest coach in school history has this season’s team on track to potentially be the best during his tenure.

Save a heartbreaking defeat on Thanksgiving where FSU squandered an 18-point second-half lead versus Temple and there’s a ton to like about this team. The three-headed monster of Bacon, Jonathan Isaac and Xavier Rathan-Mayes is one of the best in the ACC.

Offensively, the Seminoles rank in the top 10 nationally in field-goal percentage, points per game and efficiency. More importantly, Hamilton has his team playing defense like it did at the peak of his tenure. Going back to the loss to Temple, only one of the Seminoles’ last six opponents has managed to shoot better than 35 percent from the field.

FSU is still far from an NCAA tournament lock with ACC play not yet underway. There is promise, though.

Had Hamilton been let go, there’s no way to know what the Seminoles would look like right now. But it’s possible that Florida State wouldn’t have held on to its top-20 recruiting class.

Isaac is obviously the crown jewel of that group, but P.J. Savoy, who missed the first six games of the season with turf toe, has evolved into the knockdown shooter FSU desperately needed. Trent Forrest, a freshman guard, has earned valuable minutes, while C.J. Walker is a young point guard oozing with potential.

Hamilton and staff also deserve credit for developing returning players. Bacon is a much more consistent shooter. Inside, the strides made by the center duo of 7-4 sophomore Christ Koumadje and Michael Ojo, a 7-1 graduate student, have been immense. The two are combining for 11.5 points per game on 67 percent shooting from the field with 3.2 blocks per contest.

How the Seminoles perform against ACC competition will determine whether or not they return to the Big Dance after missing it in each of the last four seasons. Floundering in conference play would certainly push some ire back in Hamilton’s direction.

Through 11 games, however, the Florida State faithful have reason to be pleased with the product they see and the group of coaches directing it.