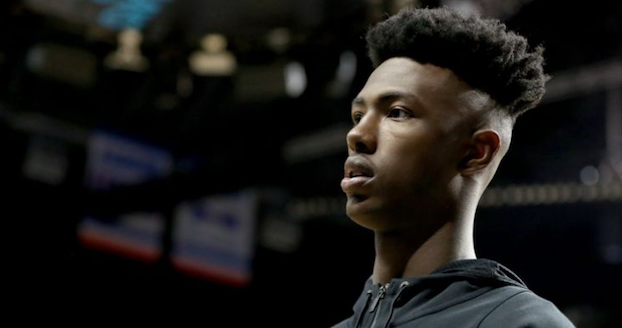 Given that one of his top players is using crutches to get around these days, Duke coach Mike Krzyzewski remains remarkably confident about the Blue Devils’ upcoming season.

That’s a luxury the Hall of Fame coach has over many of his peers in the college game.

Harry Giles, Duke’s 6-10 center who is the centerpiece of a stellar freshman class, had arthroscopic surgery on Monday to clean up scar tissue in the left knee that was reconstructed after he tore two ligaments and suffered cartilage damage three years ago.

The injury means Giles is unlikely to be ready for the start of Duke’s regular season on Nov. 11. Yet Krzyzewski believes this week’s events will only help the Blue Devils be in position to win another national championship in April.

“We feel really good about it,” Krzyzewski said. “Everything went great. He’s feeling great. But the main thing is to give him time to get back. He’ll have a chance to play and be really good as a result of doing this procedure. I thought it was a really smart thing to do that this time.”

Oh how things have changed in one season for Krzyzewski.

A year ago, when 6-9 forward Amile Jefferson broke his foot nine games into the season, Duke was so thin in the post that 7-footer Marshall Plumlee had to play between 35-40 minutes per game in ACC play.

The situation isn’t nearly as dire now, even without Giles.

Duke also recruited 6-11 center Marques Bolden and 6-10 forward Javin DeLaurier in its freshman class. Jefferson received a medical hardship waiver to return for a fifth season at Duke. Also, as Krzyzewski was quick to point out, 6-10 sophomore Chase Jeter has developed into a better player after his inconsistent freshman season.

“This is one of the most talented Duke teams,” Jefferson said.

How soon could Giles return? To see the rest of the story for free, sign up for basic access to ACCSports.com.