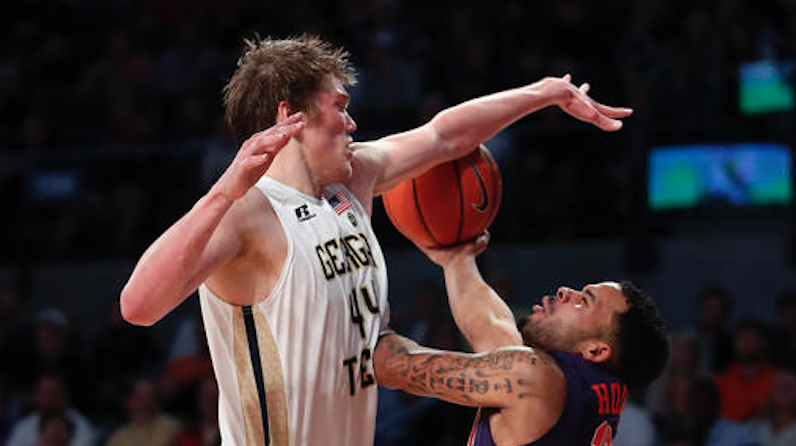 In October, the media picked Georgia Tech to finish 14th in the ACC. But the Yellow Jackets have defied the skeptics in Josh Pastner’s first season in Atlanta as the team has gotten off the ground more quickly than expected.

First, they toppled North Carolina on New Year’s Eve. After a blowout loss at Duke and a 15-point home setback against Louisville, the Jackets knocked off Clemson, winning by the same 75-63 score as the UNC victory. They then traveled to Raleigh and outplayed NC State on the way to an 86-76 victory — Georgia Tech’s highest-scoring output of the season.

The Yellow Jackets were within an eyelash of improving to 4-2 in ACC play on Wednesday at Virginia Tech. A potential game-winning shot bounced off the rim in the final seconds of that 62-61 loss.

Georgia Tech ranks last in the ACC in scoring offense, field-goal percentage and three-point field-goal defense. But the Yellow Jackets are competing and winning ACC games because they’re stingy near the rim, as well as on the boards. At over 11 offensive boards per game, Tech is making up for its poor shooting by getting high-percentage scoring opportunities near the basket.

Despite the fact that opposing teams are shooting well from beyond the three-point line against them, the Jackets rank fourth in the ACC in overall field-goal percentage defense. The Yellow Jackets entered the Virginia Tech game tied with Louisville for the ACC lead in blocked shots, averaging 6.6 per game.

Junior Ben Lammers has been the biggest key to Georgia Tech’s resurgence, leading the team in scoring and rebounding. An afterthought under Brian Gregory, Lammers has emerged into a first-team All-ACC candidate, averaging just under 15 points and 10 rebounds per game.

Lammers has nine double-doubles, including in all three of Georgia Tech’s ACC wins. He’s among the ACC’s top 10 in field-goal percentage, rebounds, offensive rebounds and free-throw percentage, leading the league in blocked shots.

Like Lammers, freshman Josh Okogie has come out of nowhere to help get the Yellow Jackets. Okogie, the league’s second-leading freshman scorer, is one of the biggest threats to NCSU’s Dennis Smith for ACC Rookie of the Year honors. The Yellow Jackets have also gotten a lift from senior Quinton Stephens, who ranks in the top 10 in the ACC in rebounding and minutes played.

After reaching the quarterfinals of the NIT last March, another postseason opportunity will be in the cards if Georgia Tech continues to play like it has in the first month of ACC play.