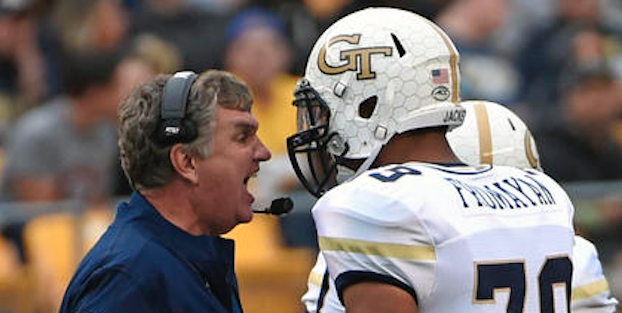 Paul Johnson (left) is trying to get Georgia Tech back to bowl eligibility. (AP Photo)

Georgia Tech has had some grand moments under Paul Johnson.

He guided the Jackets to a pair of double-digit-win seasons in 2009 and 2014. The Yellow Jackets’ Orange Bowl triumph over Mississippi State in 2014 was arguably Georgia Tech’s biggest football moment since its 1990 national championship.

But coming off a 3-9 season in 2015, and after dropping three out of their first four ACC games this fall, have the Yellow Jackets reached their zenith under Johnson?

With Tech’s challenging academic standards, along with Johnson’s no-nonsense approach to recruiting, the Yellow Jackets struggle to bring in top-end talent. Through effective player development and coaching, however, Johnson and his staff have overachieved, often producing positive results on the field.

The talent gap has caught up with Georgia Tech the last two seasons. Looking ahead, the big question is whether or not the Jackets continue to slip.

Just six players from Georgia Tech’s 2013 class are still on the roster. Five of them are starters, but the turnover is troubling and helps explain the team’s decline the last two seasons.

The Jackets have been up and down on the recruiting trail the last couple cycles. They improved to No. 44 nationally in 2015 but fell back to No. 60 last February.

Among the top defensive players in the class are former Georgia Tech All-American Pat Swilling’s gifted sons — Tre Swilling and Bruce Jordan-Swilling. Both are 4-star recruits. Along with heralded Tennessee defensive back Gentry Bonds, they represent the future of the Georgia Tech defense.

Offensively, the Yellow Jackets need a long-term fit at quarterback, with Justin Thomas’ impending graduation. Matthew Jordan and TaQuon Marshall will battle next spring for the right to lead Georgia Tech’s offense in 2017.

Georgia Tech still has work to do to finish strong this recruiting cycle, and it can’t afford to have another rough patch. Recruiting is the only way the program can work its way out of its downward spiral — one that usually doesn’t end well for head coaches.