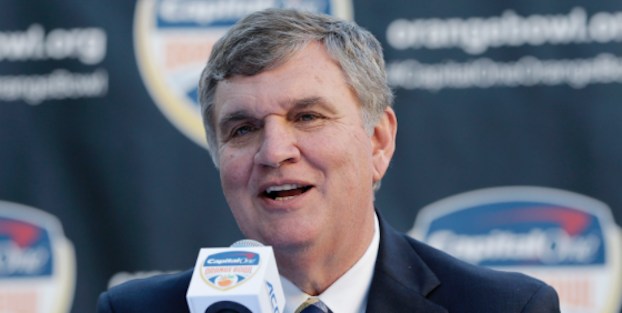 Georgia Tech football recruiting is off to a hot start to the month of June under Paul Johnson. (AP photo)

Georgia Tech finally got on the board in 2018 class when in-state linebacker JaQuez Jackson pledged to the Yellow Jackets on June 4. The 6-0, 215-pound Jackson recorded 115 tackles and 13 tackles for loss in 2016. He helped lead Peach County High School of Fort Valley, Ga., to a 12-2 record and a run to the Georgia Class AAA state semifinals.

Wake Forest, West Virginia, Maryland and Iowa also offered Jackson. With his skill set, he has the potential to aid the Yellow Jackets in run support. He takes good pursuit angles and plays hard. The 2018 ‘backer will have to bulk up, but his skill and aggressiveness is evident on film.

Despite the presence of highly touted incoming freshman linebacker Bruce Jordan-Swilling, the Yellow Jackets are aging in this position group. Terrell Lewis is heading into his senior season, while Victor Alexander, Tre’ Jackson and Brant Mitchell are rising juniors. Lewis, Alexander and Mitchell all played as true freshmen, so the opportunity is there for Jackson to make an immediate impact in 2018.

The Yellow Jackets have traditionally gotten off to slow starts in football recruiting under Paul Johnson. In the 2017 class, the Jackets didn’t reach five commitments until June 16. It took even longer in 2016 as they didn’t reach five pledges until July 31.

The flip side is they’ve been finishing strong.

Yellow Jackets in pursuit of Drinnon