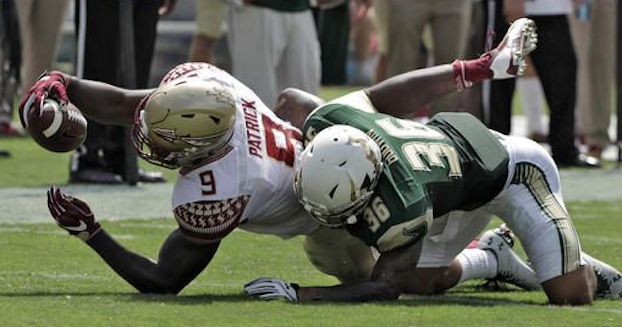 Jacques Patrick will be competing for more carries in Florida State's backfield next season. (AP Photo)

A top-10 finish and 10-win season are still on the line for Florida State, but it won’t be long before the conversation shifts toward the future of the program.

The obvious focus on offense will be on quarterback Deondre Francois and the strides he makes as a redshirt sophomore in 2017. Francois will likely be the face of the offense next season with running back Dalvin Cook almost assuredly set to take the next step and declare for the NFL Draft.

Replacing Cook is a challenge, but the guy tasked with doing it looks to be current sophomore Jacques Patrick. Patrick performed admirably when spelling Cook this season, rushing for 348 yards and four touchdowns on 60 carries. His role, however, reduced as the season went on.

Patrick is deceptively quick at 6-2 and 230 pounds and has solid hands, but he’s seen as more of a power back. That type of back has traditionally shared carries in head coach Jimbo Fisher’s offense — often in favor of a more versatile runner.

That said, there are a number of candidates who could share time with Patrick. The most veteran of the bunch is soon-to-be redshirt senior Ryan Green, but with few meaningful snaps in Green’s career, Fisher is more prone to look at younger options.

Among those returning is Amir Rasul, a current freshman who has impressed in practice. But Rasul will have a healthy dose of competition coming in. Class of 2017 commitments Zaquandre White and Khalan Laborn are both candidates to play right away, and there’s a chance that Cam Akers, a top-five national prospect, could be added to that mix.

Out wide, it’s possible that Travis Rudolph could forego his senior season and make the jump to the NFL. The odds are that FSU will have him back for 2017 after he led the Seminoles in receiving over each of the last two seasons.

The Seminoles will have to replace Kermit Whitfield and Jesus “Bobo” Wilson, but they’ve already taken strides toward doing that this season. Sophomores Nyqwan Murray and Auden Tate have combined for 50 catches, 746 yards receiving and nine touchdowns despite neither becoming mainstays in the rotation until midseason. Freshman Keith Gavin and sophomore George Campbell are two other players for whom the coaching staff has high hopes. Campbell, a former 5-star recruit, missed all of 2016 with a groin injury and has yet to live up to his high expectations.

The offensive line will lose left guard Kareem Are to graduation, and there’s an excellent chance that left tackle Roderick Johnson leaves early for the NFL Draft. If that happens, the Seminoles will have to fill voids on the entire left side of the line.

The leading candidate to man Are’s guard position looks to be sophomore Cole Minshew. Minshew has started FSU’s last two games at left guard with Are injured, and the FSU rushing offense has totaled 583 yards. As a unit, the Seminoles’ offensive front has also cut down on penalties and sacks.

Heading into 2017, left tackle may be the biggest mystery. Abdul Bello, Derrick Kelly and Ethan Frith are all options, but the answer may be a player who spent some time as the team’s starting right guard this season.

The highest-ranked offensive lineman in a 2016 recruiting class that brought in six, Landon Dickerson was too talented not to play right away. He eventually took over for guard Wilson Bell, who started all 13 games in 2015. Dickerson is naturally a tackle and who could reclaim his spot when he returns from a season-ending knee injury.

Brock Ruble and converted defensive end Rick Leonard have each spent time at right tackle this season; both have struggled. It’s unlikely that either of those two is tasked with protecting Francois’ blind side next season.

The player the Seminoles will miss the most on the defensive side of the ball is end DeMarcus Walker. The heir apparent to be FSU’s leading sack man next season is Brian Burns, who leads all freshmen nationally with 9.5. Burns, though, is undersized at 6-5 and less than 220 pounds. That makes him more suited to play the hybrid “BUCK” position.

Sophomore Josh Sweat has manned that position for most of this season. But Sweat has steadily put on weight since arriving in Tallahassee. He is up to 250 pounds and may be FSU’s best option for taking over at Walker’s natural end position. Another name to watch is Janarius Robinson.

Whether defensive tackle Derrick Nnadi stays or goes is a coin flip at the moment. If Nnadi makes the jump to the NFL, his void will likely be filled by either Wally Aime or Fred Jones. Both are sophomores whom the coaches feel very good about.

The only other defensive starter that the Seminoles are sure to lose is cornerback Marquez White. There isn’t a potential replacement for White that FSU shouldn’t be excited about. Both Kyle Meyers and Levonta Taylor have shown tremendous promise as freshmen, and the Seminoles will bring in another 5-star corner in legacy Stanford Samuels III.

Florida State’s complete picture when it comes to attrition will become more apparent in the next month. Even under the worst of scenarios, the future for the Seminoles looks very bright. That future starts in 2017.