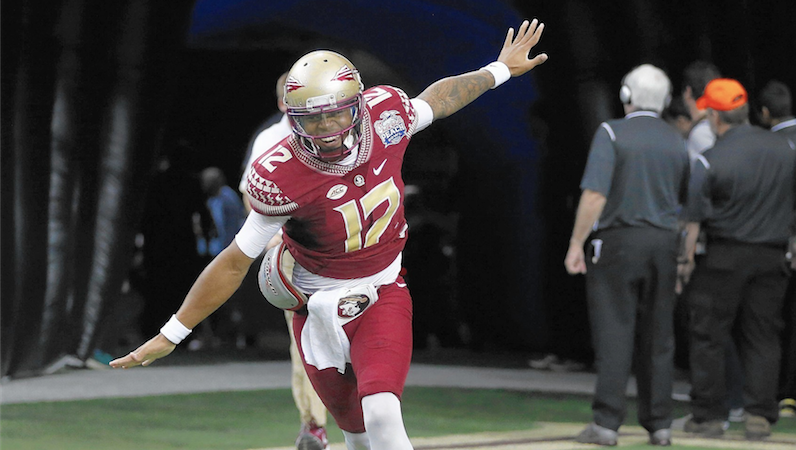 After three straight ACC titles from 2012-14, which included three top 10 finishes, two major bowl victories and the 2013 national championship, Florida State has been replaced as the preeminent football power in the ACC by Clemson.

After coming up just short against Alabama in 2015, the Tigers rallied past the Crimson Tide late this past season to capture the program’s first national championship in 35 years. Clemson has also defeated FSU in each of the last two years, despite both contests being close in the fourth quarter.

The good news for Florida State: it looks to have a very good shot at regaining its claim as the premier team in the ACC’s Atlantic division. The winner of the annual contest between the Tigers and Seminoles has gone on to win the division in each of the last eight years.

Since the annual contest has served as a de facto ACC semifinal in recent years, the conference seemed to want to make it one — the two teams will wrap up conference play against one another on Nov. 11 at Death Valley.

This year’s game should again have a huge bearing on who ultimately wins the ACC Atlantic. The good news for FSU, who is losing all-time leading rusher Dalvin Cook and sacks leader DeMarcus Walker, is that attrition may have hit Clemson a bit harder than FSU.

The Tigers, however, aren’t the only challengers to the Seminoles in the ACC Atlantic. The other is obviously Louisville.

The Cardinals ascended to as high as No. 3 last year, before ultimately closing the season with three straight losses. Led by Heisman Trophy-winning quarterback Lamar Jackson, the Cardinals handed FSU its worst loss under head coach Jimbo Fisher last season, 63-20.

This year’s contest will take place in Tallahassee on Oct. 21. While the Cardinals should again be potent on offense, the Seminoles return nine starters on the defensive side of the ball. Defensively, the Cardinals will lose six starters including leading tackler Keith Kelsey and stud defensive tackle DeAngelo Brown.

The Cardinals and Tigers appear to be the only two real threats to beat out FSU for the Atlantic division, which looks to be the stronger of the two divisions — at least at the top. Though the 2016 campaign got off to a rough start, the Seminoles finished strong with five straight wins, capped by an Orange Bowl victory over Michigan. With 15 starters returning, the Atlantic division on the surface looks to be FSU’s to lose.

In the Coastal division, each of the top four teams in the division (Virginia Tech, Miami, North Carolina and Pittsburgh) will lose its starting quarterback. No ACC team has won the conference with a first-year starter at quarterback since FSU with Jameis Winston in 2013. That’s a streak FSU’s Deondre Francois would like to see continue.