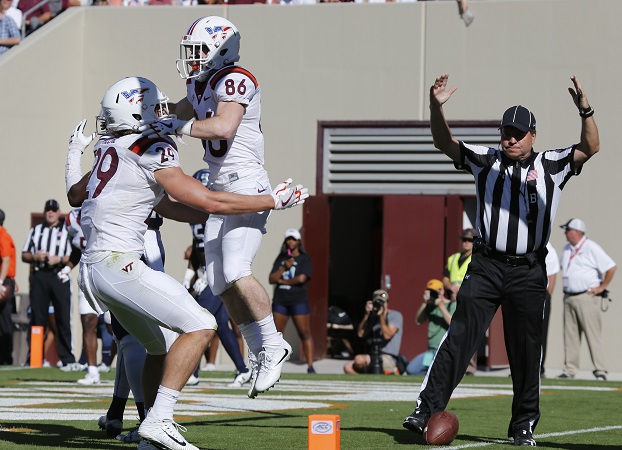 ESPN has announced that College GameDay will broadcast live from the Virginia Tech campus on Saturday, as No. 13 Virginia Tech will face No. 2 Clemson that evening. The rematch of the 2016 ACC Championship Game will be Clemson first appearance at Lane Stadium since 2011.

ESPN’s trademark college football pregame show will air live at 9 a.m. ET on ESPN, with Rece Davis, Lee Corso, Kirk Herbstreit, Desmond Howard and David Pollack and Maria Taylor on set. More details regarding the College GameDay appearance on the Virginia Tech campus will be announced on HokieSports.com, as they become available.

ESPN’s College GameDay has been on site for 10 Virginia Tech games since 1999, including last season’s game vs. Tennessee at the Battle at Bristol on Sept. 10. Saturday will mark the sixth appearance of College GameDay in Blacksburg and the first since 2007. The Hokies are 4-1 in home GameDay contests.

Since GameDay’s first show in Blacksburg on Oct. 16, 1999, the Hokies and the live production have always enjoyed a special connection. Virginia Tech became only the third school to serve as the host for GameDay twice in the same season, as GameDay served as the opening act for Tech victories over No. 16 Syracuse and No. 19 Miami in 1999. In an effort to bring a sense of normalcy back to a vulnerable community, GameDay and ESPN broadcast the first Tech football game after the April 16 tragedy on Sept. 1, 2007 vs. East Carolina.

ABC will televise the Virginia Tech-Clemson game to a national audience at 8 p.m. ET. Visit HokieSports.com for information on attending the game, plus details on TV, radio and internet coverage for fans following the Hokies across the nation.