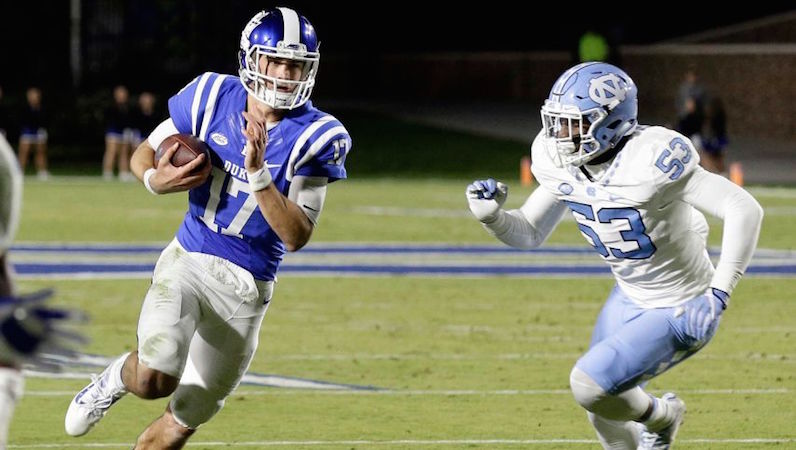 Going all the way back to 1888 — the first time UNC and Duke, then known as Trinity College, met on the football field — the game has typically been played in November.

From 1944 through 2011, the Tar Heels and Blue Devils met in November every single year.

A few years back, ACC officials made a conscientious decision to declare specific rivalry matchups for the 13th and final week of the regular season. The league chose N.C. State for UNC, and Wake Forest for Duke. The Wolfpack and Tar Heels are slated to face off in the regular season finale for a fourth straight November this year. But the UNC-Duke game was merged into regular Coastal Division scheduling.

As it turned out, the best available weekend to accommodate Duke’s request for a road ACC opener was Sept. 23. And UNC just so happened to be the only potential home opponent as the ACC went through its scheduling process.

Other potential Coastal Division foes, such as Virginia Tech, Miami, and Virginia, all had non-conference games scheduled that particular weekend. Other potential opponents, such as Florida State and Georgia Tech, host Duke this fall in Tallahassee and Atlanta.

Could the new date potentially impact the outcome?

For starters, it will be a considerably different game atmosphere than when the Tar Heels and Blue Devils typically suit up and meet. This time around, Kenan Stadium will be ablaze with early autumn sunshine.

Temperatures for September games in Kenan Stadium often shoot into the high 70s or even the 80s. This is a marked contrast from most UNC-Duke football clashes, played in the pre-winter chill of late November. Instead of coats and gloves, this year’s Victory Bell showdown will be Chill Zones and short sleeves.

UNC has only played one home ACC game in September under Larry Fedora. That was last year’s last-second 37-36 comeback victory over Pittsburgh. So there’s not much historical evidence to suggest playing Duke in September will help the Tar Heels.

However, given UNC’s offensive pace, playing Duke in late September might be an advantage for the Tar Heels. UNC will attempt to wear down the Blue Devils defensively with its mile-a-minute offensive approach.

For Duke, retaining the Victory Bell will require finding a way to once again dominate time of possession. The Blue Devils had the ball offensively for over 37 minutes last season – a decisive factor in Duke’s win.

With the threat of hot, humid conditions looming, Duke will need a similar effort to have its best chance of winning again.