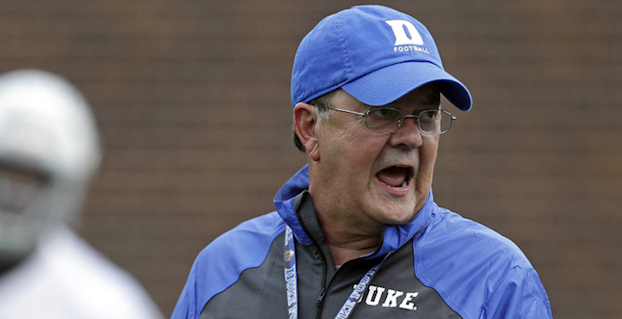 Duke has put together consecutive recruiting classes ranked among the nation’s top 50. That, of course, is a significant accomplishment for a football program that 10 years ago was the worst in Division I.

With a quick start to the Class of 2018, David Cutcliffe and the Blue Devils appear to be on their way to perhaps the best class in program history.

With 10 commitments, Duke’s class sits at No. 20 nationally and No. 4 in the ACC, according to 247sports’ rankings.

Seven offensive players and five defenders make for a balanced class. The three highest-ranked players are on defense.

Defensive end Tahj Rice is the most heralded player in the class. A 4-star talent, Rice picked Duke over his hometown Louisville Cardinals. If he follows through on his commitment and signs with the Blue Devils, Cutcliffe will add an athletic 6-4, 287-pound pass-rusher who figures to help immediately as a freshman in 2018. Rice is the No. 23 defensive end in the country.

The next two top players in the class are both 3-star recruits — cornerback Taiyon Palmer of Lawrenceville, Ga., and linebacker Rocky Shelton of Fort Lauderdale, Fla. That’s three talented playmakers set to join Duke next year.

Shelton has offers from Auburn, Florida State, LSU and Louisville, among others. Palmer committed to Duke last September over offers from Virginia, Indiana, Appalachian State and Cincinnati.

On offense, the player with the highest upside for the Blue Devils is their newest commitment: Dennis Smith. A 3-star wide receiver from Gaffney, S.C., Smith picked Duke over offers from Clemson, Florida State, Georgia and South Carolina.

At 6-2 and 185 pounds, the speedy Smith could play two seasons with quarterback Daniel Jones in the Duke system.

The Blue Devils have also received a commitment from from a top offensive tackle in Casey Holman, a 3-star recruit from Snellville, Ga. He’s 6-4 and 285 pounds already. Holman had SEC offers from Auburn, Florida, Mississippi, South Carolina, Vanderbilt and Mississippi State, as well as ACC offers from Miami, North Carolina, Virginia Tech and Wake Forest.

So Duke is going head-to-head with schools in the top two conferences and winning commitments.

The Blue Devil coaches have eyes on bigger prizes to add to the class; four-star wide receiver Kevin Austin of Pompano Beach, Fla., is among them. Though many consider Notre Dame the favorite, Duke remains in the running along with Clemson, Miami and Tennessee.

Closer to home, Duke is battling for 3-star cornerback Nate Thompson of Sanford, N.C. However, Virginia Tech and South Carolina currently stand in the way.