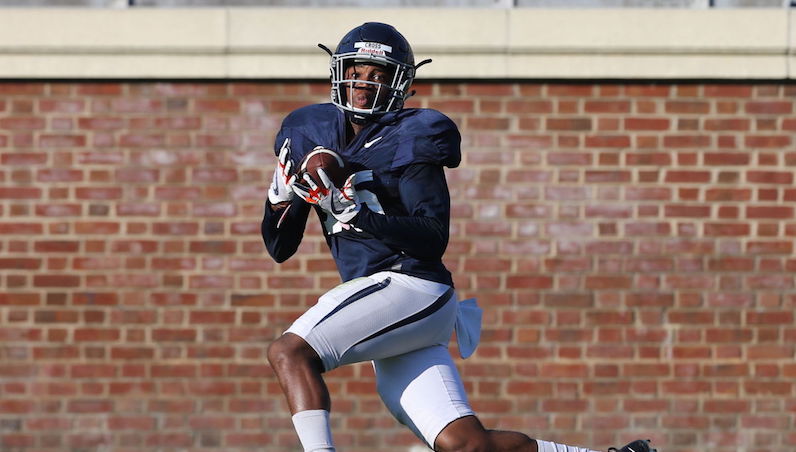 De'Vante Cross, a redshirt freshman, could be an important playmaker for Virginia football on offense this season. (Jim Daves, UVA Media relations)

Football fans love a guy who can go both ways, and that’s helped make redshirt freshman De’Vante Cross one of the most intriguing players on the Virginia roster.

So far this season he’s played wide receiver, quarterback and cornerback and there’s a good chance he’ll continue to line up on both sides of the ball the rest of the season. That’s simply a product of need on the UVA coaching staff’s part. The Cavaliers have limited at all three positions, but as head coach Bronco Mendenhall continues to bring in his own recruits, the hope is the super versatile and athletic Cross can find a more permanent role in the future.

What exactly that is, well that’s the big question. Though he threw for nearly 3,000 yards as a senior in high school, he probably won’t play much more quarterback for the Cavs, unless it’s an emergency situation or the occasional Wildcat formation. But Mendenhall would like to see him settle in at either wideout or defensive back to narrow his focus and work on improving his skills.

“Eventually we’d love to have him to be able to specialize,” Mendenhall said. “I can’t say whether it be corner or wide receiver right now. He‘s very good at both. Hasn’t reached his potential at both either. Probably because of practice time. He’s split, so his performance is split. That’s just where we have to be right now.

“For us that’s a two-deep at three positions where we really don’t have a two-deep.”

Cross could help Virginia on offense or in the secondary next season, but it’s hard to predict which one would be a better use of his skills. The Wahoos will lose at least two of their top three receivers with Doni Dowling and Andre Levrone set to graduate. That would likely put Cross in position to start and give some experience to an offense that will have a new starting quarterback as well.

The need could be less pronounced on defense. Quin Blanding is the only senior listed on the two-deep in the entire secondary and standout freshman corner Germane Crowell should be back from injury next season. Yet he might be at his best in the defensive backfield. Sophomore cornerback Bryce Hall has raved about Cross’ athleticism and his ability to defend bigger receivers.

It’s quite possible Virginia could still benefit from playing Cross at multiple positions in 2018, but his personal development would speed up with the ability to spend time in one meeting room.

De’Vante Cross is just about a lock to be on the field a lot next season, but it might not be until spring or even later we get a sense of his primary position.

Does UVA basketball have its own unicorn with Jay Huff?