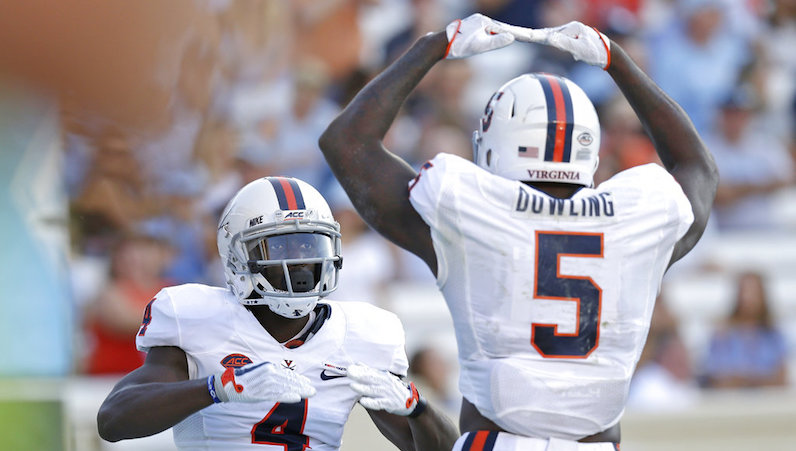 Through the first six games of 2017, Doni Dowling has doubled his number of career receiving touchdowns.

There likely weren’t too many prognosticators who predicted it before the season; however, one of the best receiving corps in the nation belongs to Virginia.

Now with the Cavaliers knocking on the door of the top 25, it’s time to look at the numbers behind an outstanding trio of receivers in Charlottesville.

There are only nine players in the ACC currently with at least 15 receptions, 300 yards receiving and four touchdowns. Three of those players hail from Virginia. Doni Dowling, Olamide Zaccheaus and Andre Levrone are doing serious damage on the perimeter for Kurt Benkert, who is having a career year, too.

In the entirety of the FBS, only 66 players have currently hit those benchmarks so far this season. Mississippi and pass-happy Oklahoma State are the only two other programs with three players of this caliber, according to Sports Reference.

Zaccheaus leads the bunch; the junior, who likes to line up everywhere, has 66 targets and 43 receptions on the season, per Football Study Hall — a catch rate of over 65 percent. Levrone is the big-play threat. He currently leads the ACC and ranks fourth nationally in yards per catch — 25.1. Over half of Levrone’s 15 receptions (8) have gone for at least 20 yards.

Then there’s Doni Dowling — who mixes efficiency and the ability to take the top off a secondary, too. According to Football Study Hall, Dowling has been targeted 51 times — 21 percent of Virginia’s pass attempts. Dowling has 30 receptions, which translates to a catch rate of 59 percent.

Dowling and Zaccheaus are also two of the eight ACC players with at least 10 receptions on third down. That’s been translated into 15 first downs.

Virginia Football is on the brink of the top 25 — now what?