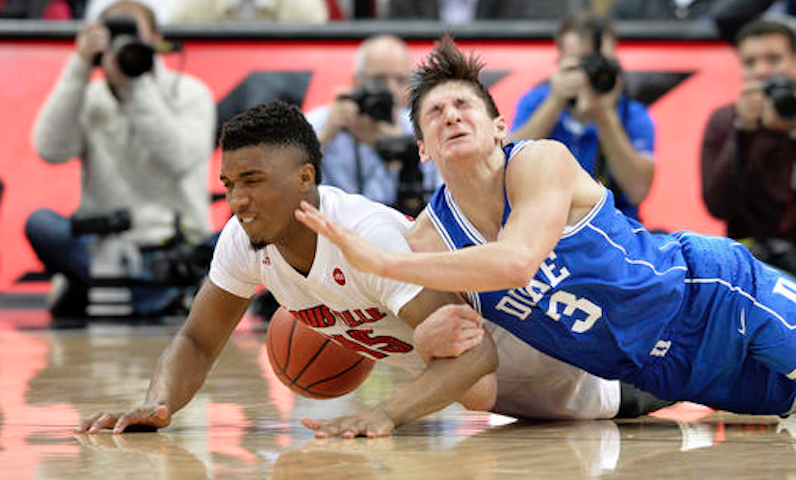 Grayson Allen (3) is a target for hecklers in all of Duke's road games. (AP Photo)

Most of the issues Duke has dealt with this basketball season have involved unfortunate injuries.

Entering Saturday night’s home game with Miami, eight different Duke players have missed at least one game due to injury this season. A ninth important person, head coach Mike Krzyzewski, has missed the last three games while recovering from lower back surgery.

However, perhaps the biggest distraction was a self-inflicted one — Grayson Allen’s suspension for his third instance tripping an opposing player.

He returned the next game, when Duke pounded Georgia Tech, 110-57, at Cameron Indoor Stadium on Jan. 4.

But Duke has shown since then that its offense isn’t quite right. Maybe that’s because Amile Jefferson is now injured. Maybe it’s because Krzyzewski isn’t coaching them in games.

Or maybe it’s because Allen’s transition to point guard was stunted by his suspension and uncertain status during the two weeks between the Dec. 21 incident with Elon’s Steven Santa Ana and the game with Georgia Tech.

Duke needs togetherness, in practice and on the court during games, to catch up on a season that’s gone sideways due to all the interruptions. Krzyzewski and Jefferson are both progressing toward being back within a couple of weeks, but it’s where Allen’s game is that matters.

His goal, of course, is to be an All-American-level player while keeping his emotions in check so that he doesn’t put himself in position to be suspended again.

Every road game Duke plays the rest of the season will be an open season on Allen as far as the opposing fans are concerned. He has to show he can play at a high level and keep his emotions under control in those circumstances.

It’s a lot for the Blue Devils to deal with, but is it too much? Bilas said he believes there’s time for Duke to work out its issues in time to be a strong team in March capable of making a Final Four run.

Of course, one more incident by Allen would throw everything asunder once again.