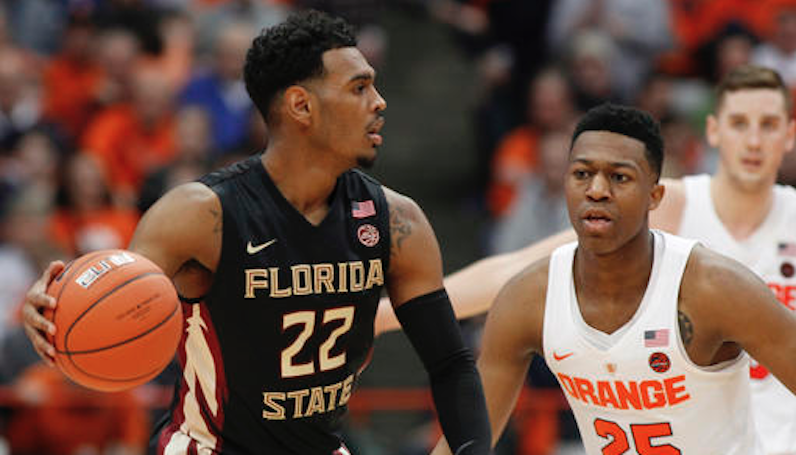 Xavier Rathan-Mayes and Florida State need to be gunning for a 4-seed or better in this year's NCAA tournament. (AP Photo)

Florida State’s two-game losing streak was halted in an emphatic way on Wednesday night as the Seminoles used a big second half to cruise past rival Miami in Coral Gables, 75-57.

The victory gives Florida State a 19-4 record for the season and a 7-3 mark in ACC play. More good news for FSU is that after three straight road games, the next two are at home against NCAA bubble teams in Clemson and NC State.

As far as brackets are concerned, Florida State sits as high as a No. 2, according to prognosticators. Most have the Seminoles penciled in as 3-seed. The lone bracketologist to have FSU as a No. 2 is CBS Sports’ Jerry Palm.

On two prior occasions, Palm actually had the Seminoles listed as a No. 1. Other bracketologists, like Joe Lunardi (ESPN) and Shelby Mast (USA Today), have FSU as a No. 3.

Entering the season, most would have deemed the campaign successful with an NCAA tournament appearance. The stellar start, however, has basketball fans in Tallahassee examining how the Seminoles could best position themselves for a deep run in the Big Dance.

While a No. 1 seed seems like a stretch at this point, a good position for the Seminoles would be any seed No. 4 or higher. The Seminoles would also benefit from opening the tournament in Orlando, which is where most bracketologists are predicting they’ll end up.

To wind up in Orlando, FSU needs to get that coveted No. 4 seed or better.

No. 4 seeds have traditionally done much better in the Round of 64 than No. 5 seeds. In No. 4 vs. 13 matchups, the higher seed has won more than 80 percent compared to less than 67 percent of the time in matchups between No. 5 and No. 12 seeds.

Landing in Central Florida would be a plus for FSU obviously because of location. While it’s technically a neutral-site game, it would likely be somewhat of a home game for the Seminoles.

While FSU is just 5-4 away from Tallahassee this season, it is a perfect 16-0 in the state of Florida. The Seminoles are 14-0 at home and also won a game over Manhattan in the Orange Bowl Classic in Sunrise earlier this season.