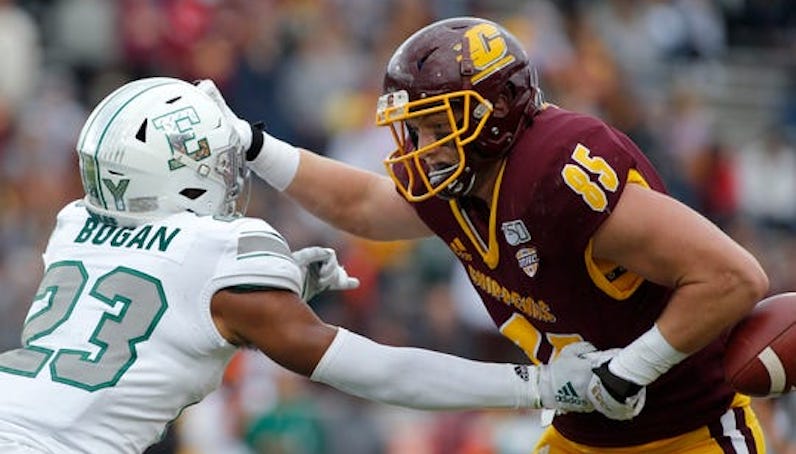 Tony Poljan (85) started his career at Central Michigan as a quarterback before making the switch to tight end. (AP Photo)

After four years with Central Michigan, the 6-foot-7, 250-pound tight end elected to enter the transfer portal. By the end of the following day, Poljan committed to Virginia as a grad transfer.

Poljan started his career at CMU as a quarterback; during the 2017 and 2018 seasons, he completed 89-of-168 passes attempts (53 percent) for 704 yards, two touchdowns and five interceptions. Poljan also ran for 248 yards and two touchdowns, too.

Before the start of the 2019 season, though, Poljan made the full-time move over to tight end. It didn’t take long before Poljan started to emerge.

At his new position, Poljan hauled in 33 passes (fifth most on CMU’s roster) for 496 yards (15 yards per catch) and four touchdowns.

With the departure of senior tight end Tanner Crowley — who caught 28 passes for Virginia in the 2019 season — the Cavaliers could use a veteran presence in their tight end ranks. Poljan satisfies that need.

In between those two additions, Virginia also picked up a commitment from Mississippi State transfer quarterback Keytaon Thompson, a former 4-star recruit. Thompson, after three seasons with the Bulldogs, is immediately eligible for the 2020 season, too. He has two years of eligibility remaining.