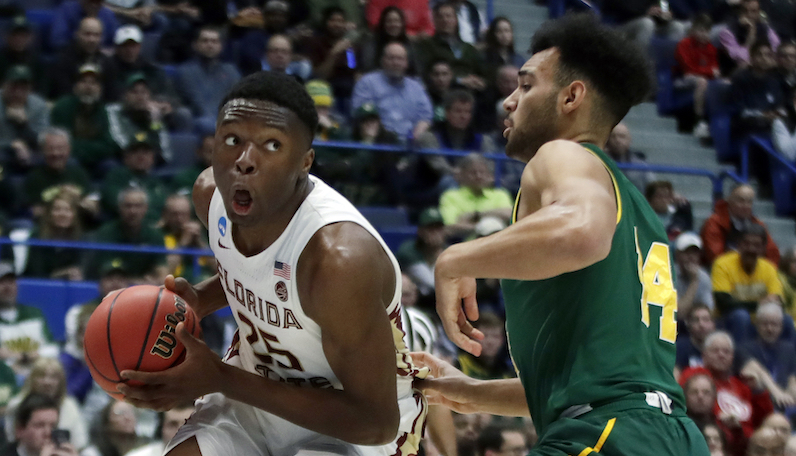 Florida State's Mfiondu Kabengele (25) looks for room to drive against Vermont's Isaiah Moll (14) during the first half of a first round men’s college basketball game in the NCAA Tournament, Thursday, March 21, 2019, in Hartford, Conn. (AP Photo/Elise Amendola)

Playing without veteran stretch 4 Phil Cofer, Florida State (28-7) advanced to the Round of 32 in the NCAA Tournament with a 76-69 win over Vermont, thanks to a 49-point second half. With the win, FSU — the No. 4 seed in the West — moves on to play the winner of Marquette-Murray State.

Vermont came out of the gate quickly, and at halftime this game was tied at 27. Behind the power of the 3-ball, the Catamounts kept this thing close; Vermont finished 16-of-32 on 3-point attempts.

Vermont’s previous high this year on 3s was 14

However, the interior power game of Florida State was simply too much — in particular Mfiondu Kabengele. The ACC’s Sixth Man of the Year finished with 20 points (6-of-13 FGA, 9-of-12 FTA) and 11 rebounds. A rabid offensive rebounder, four of Kabengele’s 10 rebounds came on the offensive glass.

Kabengele wasn’t alone, though. Veteran wing Trent Forrest, playing through foul trouble in the second half, finished with 19 points and eight rebounds. With Cofer on the sideline, FSU played a lot of four-out basketball today — with four guards around one big.

And as a team, the Seminoles went an impressive 31-of-37 (83.8 FT%) from the free throw line. That’s a season-high for free throw attempts in a game.

Florida State will play the winner of 5-seed Marquette and 12-seed Murray State — a contest highlighted by the much-anticipated Markus Howard-Ja Morant matchup. That game will take place on Saturday.

Most wins in program history. Next