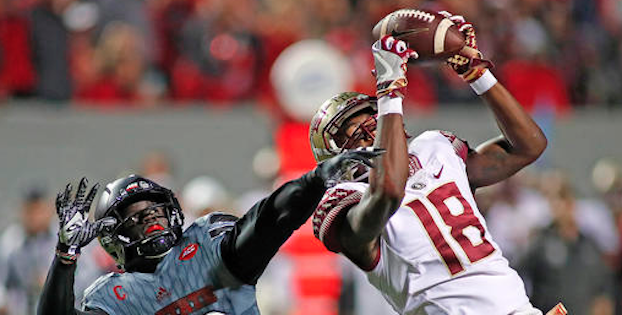 Though he was never the most heralded Florida State receiver, Jesus “Bobo” Wilson had always managed to produce for the Seminoles. Prior to going down with a season-ending foot injury, Wilson had been leading FSU with 29 catches for 388 yards.

In Wilson’s absence, however, a pair of sophomores have filled in admirably. The most notable, of course, is Nyqwan Murray.

Murray has led the Seminoles in receiving in each of the last two weeks, which included a nine-catch, 153-yard effort against NC State last week that earned him ACC Receiver of the Week honors. The week prior, Murray led FSU with six grabs for 96 yards and his first career touchdown in a 37-34 loss to Clemson.

For FSU, Murray fills much of the void that Wilson left behind. He is a good route-runner, a shifty receiver in open space and a player capable of making the contested catch on his first down. Murray is a little bigger than Wilson as well and has more upside.

The other receiver who has seen an increase is reps is 6-5 Auden Tate. Tate is tied for the team lead with four touchdown grabs this season, but for most of 2016, the 220-pound sophomore has been used primarily as a red-zone weapon.

Tate didn’t quite put up the numbers that Murray did against NC State, but he had a career game with three catches for 68 yards. He did lose a fumble after picking up good yardage on a screen pass.

While the loss of Wilson for the year means FSU will have to make do without its most dependable pass-catcher, being forced to play younger players could pay dividends moving forward. With George Campbell, a sophomore, out for the season with a groin injury and freshman Keith Gavin yet to catch a pass, fans had become disgruntled with the younger corps of receivers being slow to mature.

The emergence of Murray and the increase in playing time for Tate should not only help FSU replace Wilson’s production, but provide valuable experience for the two moving into 2017. It’s also a chance to build a rapport with redshirt freshman Deondre Francois, who has the potential to be the starting quarterback in Tallahassee for years to come.