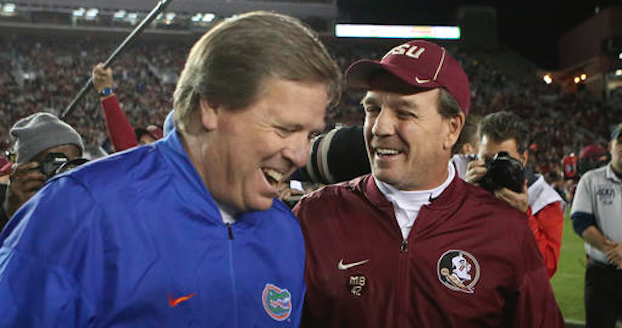 For nearly two decades, the football rivalry between Florida State and Florida has been one of streaks.

The Seminoles won five of six over the rival Gators from 1998-2003. That was followed by six straight Florida wins. Since then, FSU has had the upper hand, winning six of the last seven and four straight.

The lone Gator victory since Jimbo Fisher took over as head man in Tallahassee came by 37-26 score in 2012. Five of FSU’s last six wins in the series have come by double figures, and three have come by at least 24 points.

The question for the Seminoles is whether or not they can continue the dominance over their most bitter rival.

Short-term evidence suggests they can.

While this most recent class for Florida head coach Jim McElwain was much better than his others, ranking in the top 10 of 247Sports’ composite ratings, Fisher has been consistently out-recruiting him on the trail. Over the last four years, the worst FSU has finished in national recruiting is sixth. The highest Florida has finished is 10th.

FSU will have to replace the likes of Dalvin Cook and DeMarcus Walker this season but is doing so with two 5-star backs and one at defensive end. In total, FSU brought in four 5-star prospects this cycle. That’s more than Florida has in the last four cycles combined.

Beyond recruiting and just looking at rosters, the Seminoles also appear to be in much better shape than their rivals. While Florida State will be replacing its best two players this season, it returns quarterback Deondre Francois, defensive tackle Derrick Nnadi, cornerback Tarvarus McFadden and several others. The Gators, which have been reliant on defense during McElwain’s tenure, will lose nine starters on that side of the ball. Florida should improve on offense, but instability at quarterback could again be an issue.

Rivalries as fierce as Florida State and Florida, however, should not being taken lightly. While McElwain is often the butt of jokes from FSU fans, there is no denying that he has bettered the program.

In two seasons, McElwain is 19-8, which is the same record Fisher held after his first two seasons as head coach in Tallahassee. The argument, though, could be made that much of McElwain’s success has come with defensive holdovers from the Will Muchamp “administration”.

Judging from history, it only takes one victory to swing the trajectory of the rivalry. Entering the 2010 season — Fisher’s first as FSU’s head coach — Florida had won six straight over the Seminoles and claimed three BCS bowl victories and two national titles during that span.

The Gators had also out-recruited FSU in each of the previous five years and had won the previous three meetings by an average of 30 points. When Florida came to Doak Campbell Stadium to close the 2010 regular season, however, it got blasted 31-7 and has won just once since.

Last season’s 31-13 victory over Florida in Tallahassee made FSU’s senior class the first ever to go a combined 8-0 against Florida and Miami. Beating Florida for a fifth straight time in 2017 would also be unprecedented. While the odds look to be in FSU’s favor for the time being, beating the rival Gators should never be taken for granted.