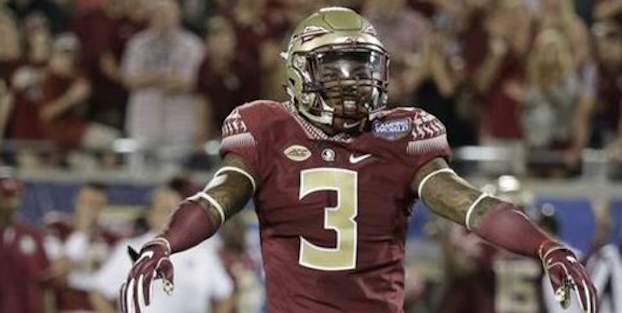 Breakdowns in the secondary and offensive line play early on are two of the things the average college football fan might cite when asking why Florida State didn’t live up its national championship aspirations.

The single-biggest reason, however, is the loss of sophomore safety Derwin James.

James tore his meniscus in the home opener against Charleston Southern and was originally diagnosed to be out 5-7 weeks. The injury has sidelined James for longer than expected, and the sophomore from Haines City, Fla., will miss FSU’s Orange Bowl showdown with No. 6 Michigan on Dec. 30.

As a freshman in 2015, James did just about everything for the Seminoles, ranking first or second on the team in solo tackles, total tackles, tackles for loss, sacks and forced fumbles. He’s a hard-hitter and can take away a large portion of the field for an opposing offense with his speed. His absence was more than noticeable from the get-go in 2016.

If there is a silver lining for the Seminoles not having arguably their best and most versatile defensive player this season, it’s that defensive coordinator Charles Kelly forced some younger players into meaningful action.

The most notable is A.J. Westbrook. A sophomore, Westbrook struggled early this year but improved dramatically as the year progressed.

With other players at the position, like Nate Andrews and Trey Marshall, battling injuries, another development was the move of Ermon Lane from receiver to safety.

A former 5-star recruit, Lane had the makings of a bust before his midseason transition to the defensive backfield, where he looked like a natural. Lane, unfortunately, suffered a significant foot injury and will miss the Orange Bowl, too, but should be able to contribute from the start in 2017.

With James, Andrews and Lane out, it’s likely that sophomore Calvin Brewton and Carlos Becker, a freshman, will meaningful action in Miami.

Another young player who may have indirectly benefited from James’ injury is linebacker Dontavious Jackson. Jackson saw increased playing time from October as the Seminoles coaches sometimes opted putting another linebacker on the field. When James was in the lineup, it wasn’t uncommon to see him line up in the box or for FSU to play with a dime package and only one linebacker. Jackson wasn’t much of an every-down linebacker this season but did well as a run-stopper and blitzer.

The full magnitude of having to play 11 games without James is truly hard to quantify. With James as a blitzer, maybe young cornerbacks like sophomore Tarvarus McFadden, the nation’s leader in interceptions, or freshmen like Levonta Taylor or Kyle Meyers wouldn’t have had to cover for as long. Maybe safeties like Westbrook wouldn’t have been called on to make touchdown-saving tackles. Maybe having James over the top would have allowed other players to take more chances going for the football.

Though it’s challenging to accurately measure what the long-term benefits of having to make do without James might be, one thing is for sure: Everyone will be thrilled to have him back in the lineup next season.