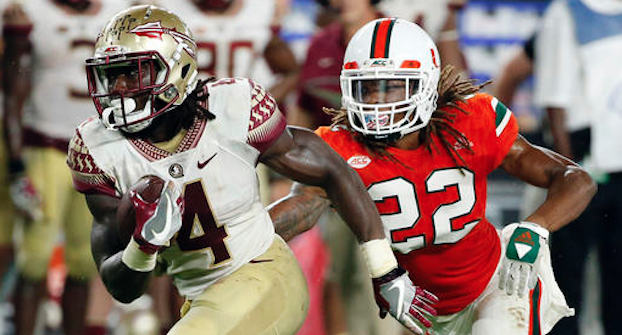 It took a little while for Dalvin Cook to get going this season, but the Florida State running back has been nothing short of remarkable over the past month.

In rushing for nearly 700 yards and five touchdowns in four games, Cook has surged into the national lead in all-purpose yards and yards from scrimmage, while pushing himself and sophomore Jacques Patrick to the top of the ACC in terms of combined rushing yardage from two running backs on any one team in the league.

Combined, Cook and sophomore Jacques Patrick have rushed for 1,179 yards through six games — more than any other tandem of ACC running backs.

Cook produced 900 of those rushing yards, compared to Patrick’s 279, so Cook is clearly the No. 1 back. The junior leads the ACC in rushing attempts, while averaging 22.71 carries per contest over the first half of the regular season. Pitt’s James Conner and NCSU’s Matt Dayes are the only other ACC running backs with 120 or more carries on the year, but Dayes is averaging an even 20 attempts per game, while Conner is averaging 17.7.

Although Patrick is firmly in Cook’s shadow — at least until Cook heads to the NFL — he’s filled in well when called upon, picking up nearly half of his rushing yards so far this season (124 in total) over 20 carries in FSU’s 55-35 win over South Florida. On two other occasions — at Louisville and at home against UNC — Patrick averaged 11 or more yards per attempt.

Miami’s Mark Walton and Joe Yearby combined for exactly 1,000 rushing yards through the first half of the regular season, with Walton accumulating 566 rushing yards and Yearby 434 yards on the ground. While that duo is a more balanced tandem, Walton and Yearby can’t outperform the combined rushing numbers that Patrick and Cook have produced.

Behind Walton and Yearby, NC State’s Matt Dayes and Reggie Gallaspy have teamed up to run for 788 yards in their first six games, while North Carolina’s Elijah Hood and T.J. Logan have combined for 778 rushing yards through seven contests.

Within the ACC, only Louisville’s Lamar Jackson and Brandon Radcliff have outdone Cook and Patrick, combining for 1,366 yards and a whopping 18 touchdowns. But Jackson, of course, is a quarterback, and the next-closest Louisville running back to Radcliff, Jeremy Smith, has 217 rushing yards. Combined with Radcliff’s 534 yards, that’s 751 combined rushing yards, just below Pitt’s duo of Connor and Moss.

The shine wears off Cook and Patrick’s combined production a little when compared to other ACC tandems in terms of yards per carry.

Between them, Cook and Patrick are averaging a healthy 5.8 yards per carry — better than several other ACC tandems including NC State’s Dayes and Gallaspy (5.75 YPC) and UNC’s Logan and Hood (5.36 YPC).

However, Louisville’s Radcliffe and Smith are averaging an impressive 8.6 yards per rushing attempt, nearly three yards per play better than Cook and Patrick. Georgia Tech’s Dedrick Mills and Clinton Lynch are also doing a little better than FSU, averaging 6.1 yards per attempt, due largely to Lynch’s ACC-leading average of 13.4. Miami’s Walton and Yearby are also slightly out-doing Cook and Patrick in yards per carry at an even six yards per rushing attempt, while Clemson’s Wayne Gallman and Tavien Feaster are churning out 5.9 yards an attempt.

It’s fair to say that Cook and Patrick are the ACC’s most productive running back duo, but much of that is largely due to work load.